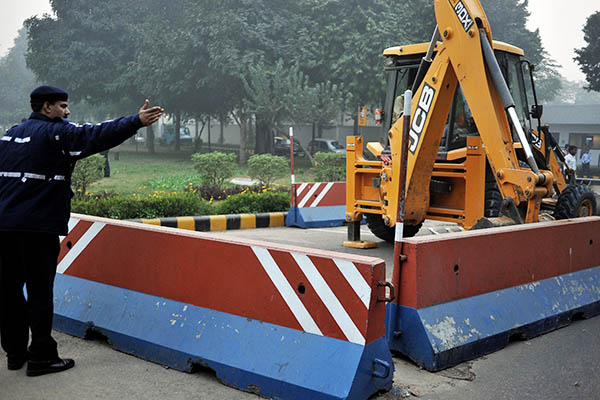 Analysts worry that prolonged backlash could drive away U.S. investors.

A furious anti-U.S. backlash in India over the arrest and strip-search of one of its diplomats threatens to further scare off foreign investors already baulking at what they see as a hostile climate, analysts say.

The economic fallout from the spat, which led to the unprecedented sight of India bulldozing security barricades outside the U.S. embassy in New Delhi last week, will only become evident in months to come.

But “it is clear this is not a PR victory that will help attract investors to India,” said Rajiv Kumar, director of the Indian Council for Research on International Economic Relations.

The diplomat, Devyani Khobragade, arrested on charges of lying on a U.S. visa application about how much she paid her Indian maid, said she had been strip-searched and “cavity-searched” and was detained with “common criminals and drug addicts.” Her detention in New York has prompted outrage in the emerging global economic power, which sees her treatment as a blow to its national sovereignty and pride.

One of the most startling reactions came from Yashwant Sinha, a former foreign and finance minister, who said India should now arrest the same-sex partners of American expats in the wake of a court ruling which upheld a colonial era ban on homosexuality. Sinha’s nationalist Bharatiya Janata Party (BJP) is favorite to win next year’s Indian elections.

The surge of anti-U.S. sentiment comes at a time when some American businesses appear to be getting cold feet about investing in India. The government unveiled a raft of measures late last year aimed at attracting more foreign investment, including reforms to allow foreign supermarkets chains to operate in India. But citing restrictive foreign investment rules, Walmart—the world’s biggest retailer—suspended plans to open stores in India and scrapped a partnership deal in October with local telecom giant Bharti Enterprises.

International firms trying to break into the Indian market have also found themselves falling foul of the country’s often labyrinthine tax laws as well as red tape. The local unit of U.S. technology services giant IBM is among those to have been caught up in a tax battle, vowing last month to “aggressively defend itself” against a demand for a reported $865 million.

D. H. Pai Panandiker, president of private economic think-tank RPG Foundation, acknowledged that while the backlash over the diplomat was understandable, it could present dangers if things did not cool down soon. “I think Americans are intelligent enough to understand what is going on in India but if it (the dispute) worsens, then it can create problems for the investment climate,” said Panandiker.

The Confederation of Indian Industry, a leading business lobby, said the row over the diplomat “should have no bearing on bilateral economic relations if there is a quick resolution.”

But the bulldozer incident in particular has the potential of unnerving American businesses from getting involved in a country, which has been the target of a number of high-profile attacks by Islamist militants. “The bulldozer incident was very graphic” for a global audience, Kumar said, adding it “exposes” Americans “to the outside” threats in what is considered one of the world’s most dangerous regions.

India aims to attract $1 trillion in foreign direct investment by 2017 to upgrade shabby infrastructure. But foreign investment is still politically suspect in many quarters in India where it is seen as taking away jobs, especially in the retail sector, dominated by small mom-and-pop stores.

When India and the United States clinched their breakthrough 2005 civilian nuclear pact ending New Delhi’s atomic pariah status, it was believed commerce would blossom between the two big democracies, often at odds during the Cold War. But U.S. nuclear plant sales have been stymied by Indian liability laws while India’s $60-billion annual trade with the United States is seen as far below potential—equivalent to just one-eighth of U.S. trade with China.

From the U.S. side, there is a belief the economic benefits from ties with India may have been overhyped, analysts say, while in India there is a sense Washington can be overbearing in trade and other matters.

The national president of the Indo-American Chamber of Commerce, Chella Srinivasan, said he believes bulldozing the barricades outside the U.S. embassy was necessary to show India cannot be pushed around. “The US is so good at arm-twisting—India is just playing their game,” said Srinivasan. “The U.S. government will realize we’re following the same tactic the U.S. has been using globally.”