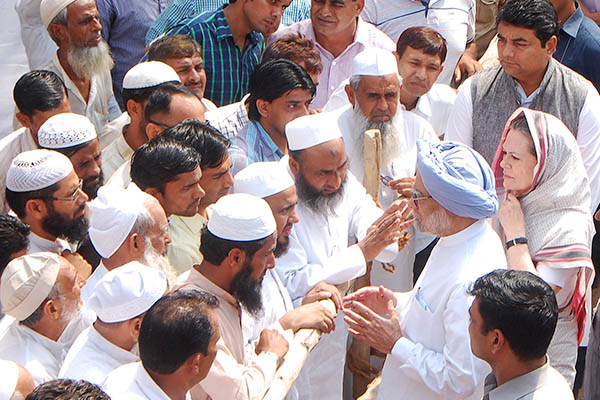 Prime Minister Manmohan Singh assures displaced the government’s job is to protect lives and property so they can return home.

Singh said his government would work with local authorities to help victims of the unrest, which erupted earlier this month in the village of Muzaffarnagar in India’s most populous state Uttar Pradesh.

“This is a very tragic incident and whoever is responsible for this must be severely punished,” Singh said, as he visited camps for those who fled the clashes, along with ruling Congress party chief Sonia Gandhi and heir-apparent Rahul Gandhi.

The unrest, during which mobs burned houses and a mosque, erupted in Muzaffarnagar before spreading to other villages. The death toll from the violence has climbed to 49, according to state police spokesman Nityanand Rai.

During the violence, Singh’s federal government deployed 5,000 paramilitary personnel and the army to the affected area of the state, which has a history of religion and caste-based violence in its 200-million population. The latest unrest triggered speculation that parties are seeking to polarize the politically pivotal state along religious lines before general elections next year.

“It is the duty of the (state) government to protect lives and property so that people can once again return to their homes,” Singh said. “The Indian government will give full support to Uttar Pradesh administration to rehabilitate the victims, and simultaneously we must make efforts to hand down the sternest of punishment to the perpetrators of this incident,” he said.

Uttar Pradesh witnessed riots in 1992 following the razing of a mosque by a Hindu mob. More than 2,000 people—mostly Muslims—were killed after the 16th-century structure in Ayodhya was demolished.

The latest clashes erupted on Sept. 7 after thousands of Hindu farmers held a meeting to demand justice over the killing of three Hindu men who had protested when a woman was allegedly harassed. Inflammatory speeches calling for action against Muslims were made during the meeting and the farmers were attacked as they were returning home, triggering a backlash.