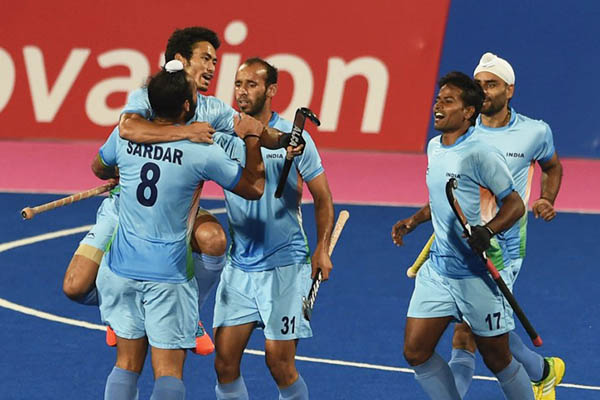 India beat Pakistan in a penalty shoot-out on Thursday to win back the Asian Games hockey title after 16 years and earn a direct entry into the 2016 Olympics in Rio de Janeiro.

The rivals played out a 1-1 draw in regulation time before Indian goalkeeper Parattu Sreejesh saved two of Pakistan’s four penalty attempts, as India put in four goals past Pakistan’s Imran Butt to win the shoot-out 4-2 and clinch their third Asiad gold medal, but their first since the Bangkok Games in 1998.

Some 4,000 fans, including Games competitors from both nations, packed the Seonhak hockey stadium to witness the first India-Pakistan Asiad final in 32 years. The defeat prolonged the misery for defending champions Pakistan, who failed to qualify for this year’s World Cup and now face a hazardous qualification road to Rio.

The match did not live up to its hype as both teams missed scoring opportunities, especially India who had the better of the exchanges in three of the four quarters.

Pakistan seized an early opening in the third minute as a swift move down the middle wrong-footed the Indian defense and Muhammad Rizwan scored from the top of the circle. India bounced back in the second quarter with repeated attacks on the Pakistani circle and after three missed chances, they drew level in the 27th minute when Kothajit Singh tapped in a pass from the flank.

The match passed off without incident except for a brief scuffle in the second quarter when a raised Indian stick hit a Pakistani player, but the umpires stepped in to cool tempers.

Earlier, South Korea won the bronze medal with a 3-2 win over Guangzhou silver-medalists Malaysia, with three of the five goals coming through penalty strokes.