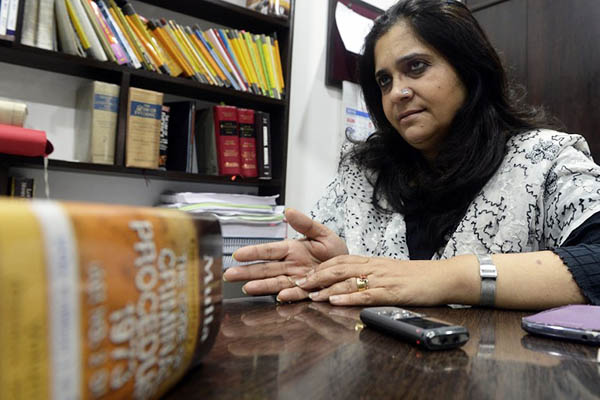 Teesta Setalvad has been a vocal critic of current Indian P.M. since 2002, when the Gujarat state led by him was wracked by anti-Muslim riots.

A long-time critic of Indian Prime Minister Narendra Modi over religious riots 13 years ago says an investigation into allegations she received illegal funding is a “vendetta” designed to silence her.

Activist Teesta Setalvad told AFP she was being targeted by the government because of her fierce criticism of Modi following deadly violence in Gujarat state in 2002 when he was chief minister. “It’s nothing short of a vendetta because even if it were to be seen as an offence, it’s an economic offence if at all, and it should be examined by the courts,” she said.

India’s Central Bureau of Investigation (CBI) registered a case against Setalvad and her husband Javed Anand on July 8 and raided their home and offices a week later. The agency is looking into whether Setalvad’s non-governmental organization Sabrang received funding from the United States-based Ford Foundation without government permission.

Setalvad described the raid as “an abuse of state power” timed to prevent her from helping the widow of former Congress M.P. Ehsan Jafri in her legal battle over his killing in the riots. “Why this kind of personal hounding? Why this attempt to get us into custody? Why this attempt to stop our movements to Gujarat just when the Zakia Jafri case is about to begin?” she asked.

Jafri is challenging a 2013 court decision that cleared Modi and other high-ranking Gujarat officials of any responsibility for the riots which left some 2,000 people dead, most of them Muslims. Her husband was among scores of Muslims burnt alive when a Hindu mob torched a housing colony in Ahmedabad that became known as the Gulbarg Society massacre.

Modi was effectively blacklisted by a number of foreign powers in the aftermath of the riots. The European Union and then the United States only ended their boycott of the right-wing Hindu nationalist when it became clear he could be elected leader of the world’s largest democracy.

Setalvad has campaigned for victims of the riots through Sabrang and her other organization Citizens for Justice and Peace. “The 120 convictions that we managed to get is through the courts, but it has been at a price so you have to take one day as it comes and fight it out,” she said at her lawyers’ offices in Mumbai. “I think this whole attempt is to silence me somehow. If you get me into custody you don’t have access to the media, don’t have access to the public, don’t have speech and then your life is in danger,” she added.

Setalvad said she was co-operating with the CBI and that her organization’s arrangement with the Ford Foundation was “permitted under law.” Officers have spent several days questioning her and her husband, who are seeking anticipatory bail in the expectation of being arrested.

The CBI said in a statement it had opened its investigation after a complaint from India’s Ministry of Home Affairs. The CBI “is legally bound to investigate [that includes search and questioning of the accused persons] every aspect of the allegations,” the statement said, noting that the sum involved was over 10 million rupees.

Setalvad, 53, is also accused by Gujarat police of embezzling donations meant for riot victims, allegations that she strenuously denies. Officers are investigating a complaint filed by residents of the Gulbarg society that Setalvad and others misappropriated funds designed to build a museum to honor those killed in the massacre. They used the money “for their own purpose,” an investigating officer with Gujarat police told AFP.

In an affidavit filed with India’s Supreme Court in New Delhi, police alleged that funds were spent on personal items including wine and eating out at restaurants in Mumbai, according to the Press Trust of India. “We’ve answered every one of those allegations with 25,000 pages of court documents,” Setalvad told AFP.