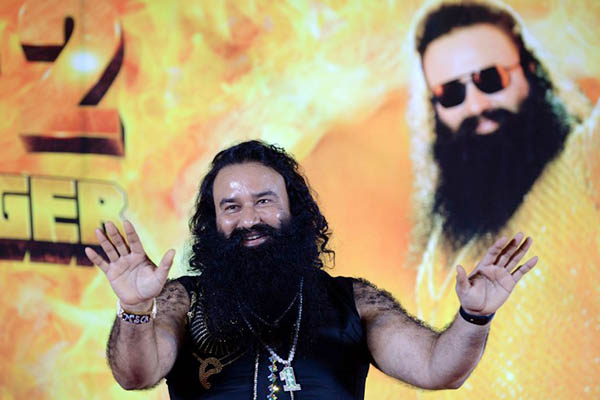 An Indian court on Monday sentenced a controversial spiritual leader to a total of 20 years in prison for raping two of his devotees, days after his followers went on a rampage that left 38 dead.

The riots broke out on Friday when Gurmeet Ram Rahim Singh, 50, was convicted of raping the two women at the sprawling headquarters of his hugely popular Dera Sacha Sauda sect in the northern state of Haryana in a case that dates back to 1999. “He has been sentenced for 10 plus 10, which is a total of 20 years of imprisonment,” said Abhishek Dayal, spokesman for India’s Central Bureau of Investigation (CBI), after the sentencing hearing. “I have the judgment which details the sentence.”

A lawyer for the victims earlier told AFP that Singh had been sentenced to 10 years in jail. In fact, he was given two consecutive 10-year sentences.

Authorities had imposed a security clampdown on the city of Rohtak where Singh is being held due to fears of a repeat of Friday’s violence, when tens of thousands of his supporters set fire to cars and clashed with security forces. Prime Minister Narendra Modi condemned the violence but his ruling Bharatiya Janata Party, which is also in power in Haryana, was criticized for failing to anticipate the riots.

Police were taking no chances on Monday in Rohtak, where mobile Internet was cut, roads barricaded with barbed wire and soldiers deployed to man checkpoints.

More than 100 of Singh’s senior loyalists had been placed in detention as a precautionary measure, said Rohtak police chief Navdeep Singh Virk. He said his officers would use “whatever force is required” against the guru’s devotees should they again resort to violence. “If the situation so arises that [we] need to use firearms, my officers have complete authority,” the police chief told broadcaster NDTV.

A judge was flown in by helicopter to sentence the spiritual leader, known as the “guru in bling” for his penchant for bejeweled costumes.

The rape case was brought after an anonymous letter was sent to then-prime minister Atal Bihari Vajpayee in 2002, accusing Singh of repeatedly raping the sender and several other women in the sect. A judge asked the federal Central Bureau of Investigation to look into the accusations, but it took years to trace the alleged victims and it was not until 2007 that two women came forward and filed charges.

Utsav Singh Bains, a lawyer for the victims, said there could be dozens more cases of abuse involving women at the sect. “We believe there are at least 48 more victims who were sexually abused and who may have been killed or are too scared to come out and testify against Ram Rahim,” he told AFP by phone.

Singh also stood trial for conspiracy over the murder in 2002 of a journalist investigating the rape allegations. He denied the charge and the case is ongoing.

Over the weekend thousands of followers congregated in the spiritual headquarters of his sect at Sirsa, despite calls from police and troops for them to disperse. Devotees eventually began trickling out one by one from the compound Sunday, under the supervision of hundreds of soldiers and riot police.

Modi said on Sunday it was “natural to be worried” as the violence even briefly reached the capital New Delhi. “Violence is not acceptable in the nation, in any form,” he said in his monthly radio address. “Those who take law in their hands or take to violence will not be spared, whoever they are.”

Haryana authorities came under fire grossly underestimating the risk posed by the army of devotees after violent protests in many parts of the northern state on Friday. Followers of the self-styled “godman” continue to insist upon his innocence.

India has been rocked by numerous scandals involving popular ascetics claiming to possess mystical powers. Singh’s sect describes itself as a social welfare and spiritual organization but he is no stranger to controversy. In 2015 he was accused of encouraging 400 followers to undergo castration at his ashram so they could get closer to god.