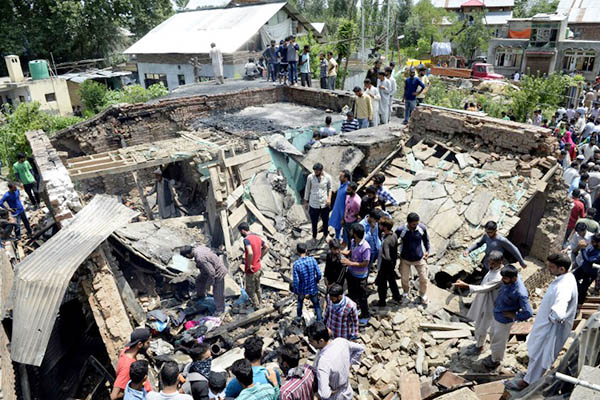 Indian forces killed a top militant commander in India-administered Kashmir on Tuesday, triggering clashes in which one protester was killed and dozens injured.

Abu Dujana, a senior fighter from the Lashkar-e-Taiba militant group, was killed during a raid near Srinagar in disputed India-administered Kashmir.

Indian troops and police special counterinsurgency forces surrounded the village of Harkipora after a tip off that the militant and an aide were hiding in a house. A fierce gunfight followed, police sources said. A house used by the militants was set ablaze by soldiers and another was blown up with heavy explosives, witnesses said.

Police said the bodies of the two militants were charred “nearly beyond recognition.”

The 26-year-old Dujana, who was renowned for evading capture, was considered an “A++” target by security forces, who hailed his death a “major achievement.”

A police officer, speaking on condition of anonymity, said Dujana’s aide was a teenaged local rebel and that his burial in his hometown was attended by thousands of mourners. As news of Dujana’s killing spread, thousands of Kashmir residents came out onto the streets and clashed with government forces, throwing stones at them.

Troops retaliated by firing tear gas, pellet guns and bullets, killing a young man and injuring at least 70 others, witnesses and a police officer said. A woman nurse was wounded by a bullet inside a hospital in Pulwama town, south of Srinagar, when government forces fired at protesters who had assembled outside, a hospital source said.

Hundreds of students and residents clashed with police in Lal Chowk, the main commercial center of Srinagar, where shopkeepers downed shutters and panicked parents rushed to collect their children from schools.

Separatists opposed to Indian rule in the Muslim-majority region have called for a general strike on Wednesday. The state government, in turn, has ordered all schools, colleges and universities to be shut too.

Security officials say Dujana, who reportedly crossed from Pakistan-administered Kashmir in 2010, was the longest surviving fighter in the Indian-controlled territory and used his popularity to escape military traps and mount attacks on security forces. He had a reputation for being “a master of disguise” who escaped at least five previous military cordons.

“He [Dujana] kept weapons and ammunition stashed away in different areas and moved like a civilian disguised as a student and sometimes as a laborer,” a resident of south Kashmir, who declined to be named, told AFP.

The militant also appeared at the funerals of slain comrades at least twice, but gave police and troops the slip. “He knew the territory like the back of his hand. He was very, very mobile,” a police officer said on condition of anonymity.

His death is one of the biggest blows to Kashmiri separatists since the death of another commander, Burhan Wani, in July last year. Wani’s killing sparked months of widespread protests against Indian rule and left nearly 100 civilians dead and thousands injured.

Since then, stone-throwing civilians, sometimes entire communities, have increasingly gone out onto the streets to support rebels trapped by military cordons in a bid to help them escape.

Kashmir has been divided between India and Pakistan since the end of British colonial rule in 1947. Both claim the Himalayan territory in full. Militant groups, including Taiba, have for decades fought roughly 500,000 Indian soldiers deployed in the territory, demanding independence or a merger with Pakistan.

Tens of thousands, mostly civilians, have died in the fighting.