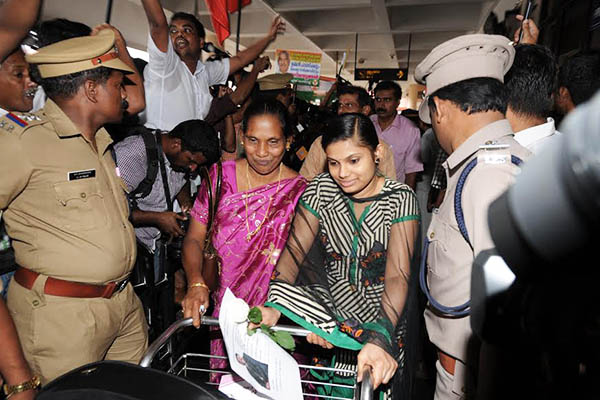 A group of 46 Indian nurses who were trapped in an area of Iraq seized by militants were greeted by tears and cheers from relatives on Saturday as they arrived home in southern India.

The relatives, clutching flower bouquets and hoisting “Welcome Home” banners, thronged the nurses as they emerged into the airport in the Kerala city of Kochi, tearfully embracing them. “We’re happy and relieved,” one unidentified nurse told local television stations.

The nurses found themselves stranded while working in a state-run hospital in Tikrit when jihadists launched their lightning offensive last month. It was not immediately clear if the nurses had been abducted and held captive or if they had been trapped and were unable to leave.

They were moved from Saddam Hussein’s hometown of Tikrit to the militant-held city of Mosul on Thursday against their will, the Indian foreign ministry said. The nurses told reporters at the Kochi airport they had no complaints about their treatment by the rebels. “They took care of us,” another nurse told reporters.

The nurses, early on Saturday, had boarded a specially chartered plane for India from the city of Arbil, the Kurdish regional capital, where they had been shifted the previous day.

“I thank god for keeping my daughter safe in her hours of peril. She had gone to Iraq … to make our lives better,” M.V. Retnamma, the mother of one nurse. “I can see her alive. For the last 25 days, we were praying for her safe return,” Retnamma said as she joyfully welcomed her daughter Monisha.

Many Indian workers travel to the Gulf to seek better-paid employment. Some of the nurses had earlier resisted returning to India as they had taken large loans to get work in Iraq.

Kerala Chief Minister Oommen Chandy, who welcomed the nurses at the airport, attributed their safe return to the “joined efforts” of the foreign affairs ministry, embassies and his state. “We worked together to get them back and we got a 100 percent result,” Chandy told reporters, adding the nurses’ return had been complicated by the “complete disruption of law-and-order in Iraq.”

The Indian foreign ministry said the government was not immediately able to disclose details of how it arranged for the nurses to return home. “The best antidote for them is to be with their near and dear,” Syed Akbaruddin, spokesman for the Indian foreign ministry, told reporters Friday. “We hope the balm of being with their friends and family would be the best solution for their travails,” Akbaruddin added.

Nurse Marina Jose told NDTV news channel before leaving for India that the women had despaired of ever seeing their homeland again. “We never thought we will come back, that we would come out,” she said.

But she added in apparent reference to the rebels, “They didn’t harm anyone. They didn’t touch even. They talked nicely,” Jose said, a view many of the other nurses echoed Saturday.

The nurses’ group was separate from another 39 Indian construction workers being held in Mosul, Iraq’s second-biggest city and the first to fall in a jihadist-led offensive that has overrun swathes of territory north and west of Baghdad. More than 30 Turkish truck drivers were freed on Thursday after three weeks in captivity, but a separate group of almost 50 Turks seized in an attack on the Turkish consulate in Mosul last month remain in captivity.

The situation of the trapped workers in an area of Iraq overrun by militants in recent weeks had been the first foreign crisis for the new rightwing government of Prime Minister Narendra Modi. Militants led by the Islamic State jihadist group launched their offensive on June 9, and swiftly took control of large chunks of five provinces, sparking a crisis that has alarmed world leaders.