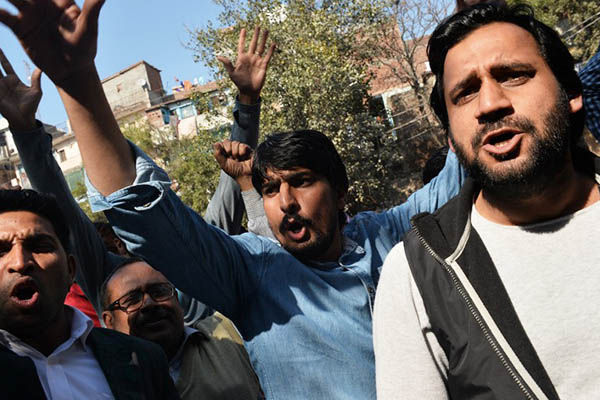 Students who turned themselves in say they went into hiding following attack on main accused Kumar.

Indian police said Wednesday they had arrested two students wanted in a sedition case that has sparked major protests after the pair gave themselves up following nearly two weeks on the run.

Umar Khalid and Anirban Bhattacharya surrendered to police at midnight on Tuesday after a court refused to grant them protection from arrest over a rally at their university, at which a group allegedly shouted anti-India slogans.

The pair are accused of being among the organizers of the event at the prestigious Jawaharlal Nehru University (JNU) in New Delhi. They face the same charge as JNU student union leader Kanhaiya Kumar, whose arrest earlier this month has brought thousands of students and teachers onto the streets.

They accuse Prime Minister Narendra Modi’s Hindu nationalist government of misusing the British-era sedition law to crack down on dissent.

Rights activists have long urged India to repeal the law, which carries a maximum sentence of life imprisonment and has frequently been used against critics of the government of the day. Many were outraged when Kumar was assaulted by rightwing lawyers after he appeared in court for a preliminary hearing last week in an apparently orchestrated attack.

The latest arrests come amid mounting concern about freedom of speech in India. Several authors last year returned a prestigious award in protest at what they called government inaction over the murder of atheist scholars and the lynching of a Muslim man suspected of eating beef.

Delhi police spokesman Rajan Bhagat said Khalid and Bhattacharya would be produced before the court later Wednesday. “They will be produced in the court today. We will ensure their security,” he said of the students, who are both in their twenties.

Khalid’s lawyer Kamini Jaiswal told AFP the two men had decided to cooperate with police, who had issued a wanted notice for them at the time of Kumar’s arrest on Feb. 12 and alerted airports to stop them traveling abroad.

The two students have said they went into hiding out of fear for their safety following the attack on Kumar, but were ready to face justice.

Another three JNU students who face the same charge but were not placed on the police wanted list remain on the campus, where they are protected from arrest because police are not allowed to enter without permission from university authorities. A student leader who asked not to be named said the three were in contact with police and prepared to cooperate in their investigations.

The Feb. 9 rally was held to mark the hanging of Afzal Guru over a deadly attack on India’s parliament in 2001. Guru denied plotting the attack carried out by Kashmiri separatists and some say he was not given a fair trial.

The case has caused outrage at both ends of the political spectrum. On Wednesday the student wing of the ruling Bharatiya Janata Party (BJP) came out on the streets to defend the government’s actions.

The left-leaning Congress party, which governed India until it was ousted by the BJP in a 2014 election, has been particularly vocal in support of the JNU students.

“Nothing is more unfair than labeling a university as anti-national,” said Congress lawmaker Jyotiraditya Scindia during a parliamentary debate on the row on Wednesday. “Blacklisting a university of 8,000 students for the actions of eight students is absolutely unacceptable.”

Modi’s ministers have stood firm and warned of tough action against anyone engaging in “anti-national” behavior. “If this is what freedom of expression is, then it is very unfortunate,” BJP lawmaker Anurag Thakur said during the debate. “We will not give any opportunities for such anti-national elements who chant these kinds of slogans for the destruction of the country to come forward.”