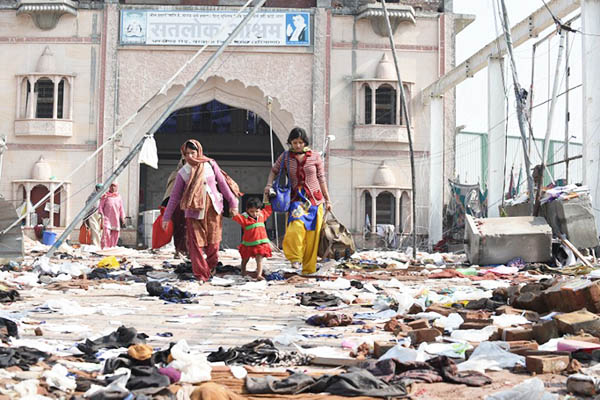 Five bodies found at Hindu guru’s ashram during police raid to arrest him on court orders.

Police on Wednesday arrested a guru after a violent standoff with thousands of followers at his sprawling ashram in northern India, where the bodies of four women and a child have been found.

Supporters of self-styled ‘godman’ Rampal Maharaj, who is wanted on a series of charges including conspiracy to murder, had guarded the ashram for days armed with stones, petrol bombs and other weapons after a court ordered his arrest. Police finally detained him late Wednesday, more than 24 hours after they stormed the heavily guarded ashram using water cannons and tear gas.

Ranjit Singh, a local police spokesman, said the 63-year-old had been taken away from the ashram in an ambulance and would be sent for medical checks before appearing before a court.

More than 100 people are being treated in hospital after clashes between followers and police who forced their way into the compound where Rampal was hiding out. S. N. Vashisht, the director general of police for Haryana state, said earlier Wednesday that officers had found the bodies of four women and a child in the ashram. The child appeared to have died of natural causes but it was unclear how or when the four women lost their lives, and a post-mortem will be performed on their bodies. Another woman died after being taken to hospital apparently suffering from a heart condition, Vashisht added.

It remains unclear how many people were holed up in the ashram with Rampal, but thousands have poured out of the 4.8-hectare compound since police stormed in on Tuesday. “There could still be between 3,000 and 4,000 people inside the complex,” local police chief Hisar Satender Kumar Gupta told reporters outside the ashram after the arrest. “We are making announcements for them to come out and take buses.”

Several people said they had to fight their way out of the ashram, while police claimed they had been used as human shields to protect the guru. “What started as a trickle hasn’t yet stopped and we have dropped off around 10,000 people at nearby bus and train stations,” assistant police superintendent Jashandeep Singh said of the followers. “The people who left the ashram mostly said that they were being held against their will, as a shield for the guru against any police action.”

Police sought Rampal’s arrest after he repeatedly refused court orders to appear to answer charges including conspiracy to murder, inciting mobs and contempt of court. They accuse him of ordering his disciples to fire on villagers during clashes in 2006 in which one person was killed and scores injured.

Rampal, a former engineer who considers himself an incarnation of the 15th-century mystic poet Kabir, denies the charges, according to a statement on his website. He claims his hundreds of thousands of followers across India have had chronic illnesses cured and “ruined families have again become prosperous” by devoting themselves to his teachings. Disciples must give up alcohol, smoking, meat, eggs, adultery and gambling, while singing and dancing is banned along with worship of “any other god or goddess.”

Born in a village in Haryana state to a family of farmers, Rampal obtained a diploma in engineering and later worked at the state government’s irrigation department. Rampal went door to door proselytizing on behalf of a seer called Ramdevanand and, with an ever-growing flock of disciples, opened his ashram in 1999.

India has been rocked by several scandals involving immensely popular ‘godmen,’ mostly Hindu ascetics who claim to possess mystical powers. Last year one was charged with sexually assaulting a schoolgirl. For many Indians, gurus play an integral role in daily life. They say they offer a pathway to enlightenment in return for spiritual devotion and often give donations to ashrams, temples and charity projects.