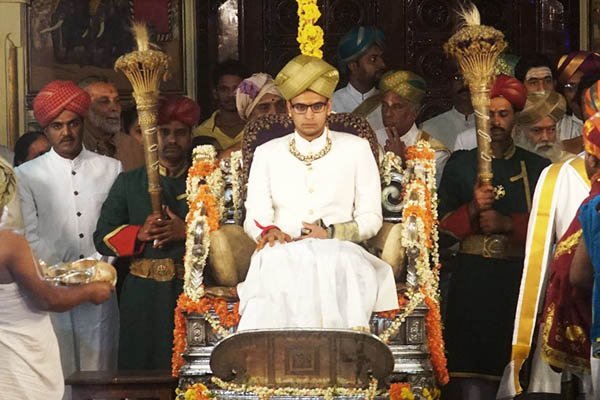 A 23-year-old economics graduate was on Thursday crowned the maharaja of a centuries-old royal family in southern India in an elaborate ceremony involving 40 priests and attended by 1,000 well-heeled guests.

At 15 temples spread throughout opulent palace grounds in Mysore, Yaduveer Krishnadatta Chamaraja Wodeyar was inducted as the 27th head of the Wodeyar dynasty, which once ruled swathes of southern India, in a two-day event. Wodeyar, a recent economics and English graduate from Boston University, succeeded Srikantadatta Narasimharaja Wodeyar who died in 2013 of a heart attack.

Srikantadatta was childless and did not name an heir but his widow Pramoda Devi adopted the young Wodeyar, a relative, at a ceremony in February.

“My role here is ensuring that heritage, our heritage, remains alive,” Wodeyar told the NDTV news channel as photos and footage showed him wearing a large gold headpiece studded with gems while seated on a throne adorned with flowers. “It is also… fulfilling our contribution to the people in the state,” he said.

The Wodeyar dynasty ruled over what was then Mysore state for nearly six centuries and was known for its progressive rule of social reforms.

India’s maharajas once ruled over around 100 million people across 565 princely states. But they lost their powers when India gained independence in 1947, although they are still wealthy and local populations revere many of them.

Wodeyar will now be custodian of the sprawling Mysore and Bangalore palaces and acres of land spread across Karnataka state. The Mysore palace, the seat of the kingdom and known for its mix of stained glass, mirrors, solid silver doors, marble floors and mahogany carvings, has become a tourist attraction. It is lit up at night on public holidays and Sundays by nearly 100,000 light bulbs, according to the palace’s website.