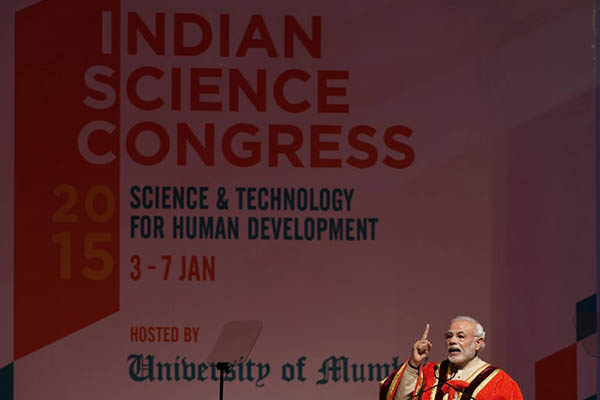 A series of sensational claims, including that ancient Hindu sages were the pioneers of aviation and algebra, have triggered a furious debate in Indian academic circles amid warnings that nationalist breast-beating could undermine the country’s burgeoning scientific reputation.

A weekend conclave of experts and researchers, whose guests included new Hindu nationalist Prime Minister Narendra Modi, was intended to highlight some of the latest achievements by India’s scientific community.

The nation’s scientific prowess received a major boost last year when it became the first Asian country to reach Mars, a breakthrough that academics hoped would make people view India in a different light.

However the headlines from the weekend conference in Mumbai were dominated by the contributions in a session devoted to Vedic science, which appeared in ancient Hindu scriptures.

Former pilot turned author Anand J. Bodas said Maharishi Bhardwaj—a sage of the Vedic period (around 1500-500 B.C.)—had laid down as many as “500 guidelines” on flying in one of the ancient Hindu texts much before Leonardo da Vinci’s 15th century ideas for flying machines and the American Wright Brothers’ first flight in 1903. The Maharishi defined an airplane as a vehicle which could even travel from one planet to other, Bodas said before adding that some of the “jumbo” airplanes of ancient India had “40 small engines” and could move not only forward but backward as well. He then raised eyebrows further by claiming aviation technology existed in India as early as 7,000 B.C., though he did not explain his evidence for this theory.

In the same session, Science and Technology Minister Harsh Vardhan also caused a stir by claiming that Indians were the first to discover some of the most important mathematic principles. “Our scientists discovered the Pythagoras theorem but we very gracefully allowed the Greeks to take the credit,” said the minister who is a member of Modi’s rightwing Bharatiya Janata Party. “We all know we knew ‘beej ganit’ [Hindi term for algebra] long before the Arabs, but very selflessly allowed it to be called algebra.”

The claims did receive some support, including from opposition politician Shashi Tharoor who said “the genuine accomplishments of ancient Indian science” should not be underplayed just because their modern-day champions are Hindu supremacists. But D. Raghunandan, president of the All India People’s Scientific Network, said such claims for Vedic science would only end up heaping ridicule on the country’s scientific community.

“They want to trace everything back to the Hindu Vedic age. They are not talking about the medieval period because then they would have to mention the influence of Islam,” he said. “We are giving a young, aspirational generation a wrong idea of science. And this is why nobody takes Indian scientists seriously.”

Even before Bodas took to the stage, a NASA researcher was reported to have launched a petition calling for the author’s speech to be cancelled as it had no scientific basis. Bodas was not immediately available for comment.

But reacting to Bodas’s speech, Nobel Prize winner Amartya Sen said that a distinction had to be drawn between imagination and reality. “As our epics show, Indians have thought about flying for a long time. But it would be fanciful to say that India invented the airplane,” Sen told the CNN-IBN news network. “If ancient India had airfare technology, we would like to see some evidence,” the economist said.

One noted scientist said Bodas’s claims about aviation had been debunked 40 years ago by a team of experts after a thorough study. H. S. Mukunda, one of the authors of the study, said the planes described by Bodas are “at best poor concoctions rather than expressions of something real.”

“None of the planes has … capabilities of being flown, the geometries are unimaginably horrendous … and the principles of propulsion make them resist rather than assist flying,” Mukunda told the Indian Express.

In an editorial after the conference, The Hindustan Times criticized the claims as baseless, saying that “while proof of such things is said to exist in the texts of yore, none of this seems grounded in fact.”

In a speech in October, Modi himself cited examples from Hindu mythology as proof that plastic surgery and genetic science existed in ancient India. “We worship Lord Ganesha. There must have been some plastic surgeon at that time who got an elephant’s head on the body of a human being and began the practice of plastic surgery,” Modi claimed.

Critics have accused the government of pursuing a ‘majoritarian Hindutva’ agenda by exalting Hindu history, culture and religious texts while ignoring the country’s secular credentials. Hindus comprise some 81 percent of India’s 1.2 billion population with 13 percent Muslim and a little over 2 percent Christians.

India has given the world the number ZERO and ever since its contribution to science and technology remained at ZERO!

HOW ABOUT THOUSANDS OF PRACTITIONERS OF TRANSCENDENTAL MEDITATION TODAY IN THE UNITED STATES AS WELL AS INDIA OVERCOMING GRAVITY EVERY DAY? HOW ABOUT MAHARISHI MAHESH YOGI WALKING THROUGH WALLS AS DEEPAK CHOPRA M.D. HAS DESCRIBED SEEING HIM DO IN ONE OF HIS BOOKS? HOW ABOUT THE AMERICANS‘ CRIMES AGAINST THE WORLD‘S GREATEST SCIENTIST WHO HAPPENS TO BE AN INDIAN?