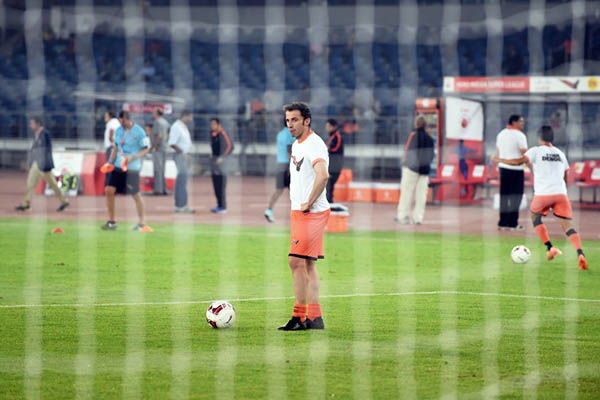 Football league still has to overcome many challenges, including low attendance at games, in order to succeed.

Just five weeks after a glitzy kickoff, India’s fledgling football league claims to be the most popular in Asia—even if the quality of matches and performances of its ageing stars have left fans underwhelmed.

Backed by some of the biggest names in business and sport, the inaugural league has lured a host of big-name internationals out of retirement to help India shed its image as the sleeping giant of world football. Halfway through the competition, Indian Super League (ISL) organizers—citing the latest figures—claim 22,639 fans on average have packed stadiums for each match, while a total of 318 million viewers have watched on television. “[The] Indian Super League has achieved the rare milestone of having registered the highest average stadium attendance for any football league in Asia, ahead of competitions such as China’s CSL, Japan’s J-League and South Korea’s K-League,” an ISL spokesman said. The figures mark “India’s arrival as a footballing nation to the world,” the spokesman added.

But on a smoggy night last week at the capital’s impressive Jawaharlal Nehru stadium, just 1,000-odd fans turned out to watch the bottom two teams—Delhi Dynamos and FC Goa—go head to head. “It’s not the same as watching Arsenal play Chelsea, that’s for sure,” said 26-year-old computer college student Anindya Sharma, waving a handmade sign. “But we should support our own league, our own Indian league,” he added, cheering with his friend in an empty stand.

Warming the Delhi bench, Italian great Alessandro Del Piero glumly watched his team get thumped 4-1. The former Juventus striker described the league as a “big challenge,” adding he would reserve his judgment until after the tournament ended. “Everyone at the moment is trying to pour as much effort as they can into the competition [to make it a success],” said the 40-year-old.

Despite being the second most populous nation, India has long struggled in world football and currently stands at 159—out of 208 countries—in the FIFA rankings. Cricket dominates on the subcontinent, and football at the grassroots level has long been neglected.

However, the English Premier and other European leagues are hugely popular on satellite TV, and passion for local teams has long existed in pockets of the country, especially in former British colonial capital Kolkata and ex-Portuguese colony Goa. “In India … the people, they love football so much, they love the Premier League,” said former France and Arsenal star Robert Pires, 41, who scored his first goal last week for Goa.

The ISL has slick advertisements and Bollywood A-listers, such as Salman Khan, as co-owners to try to prick the interest of millions of Indians normally devoted to cricket. Famous players including Sweden’s Freddie Ljungberg, 37, and controversial Frenchman Nicolas Anelka front the eight city-based franchises.

But India’s best-known football writer, Novy Kapadia, said initial excitement has dwindled. “There’s been a spate of goalless draws. And there are too many ageing players who take longer to recover from injuries,” Kapadia said, pointing to Ljungberg who has played only twice for Mumbai City. “There is no emotional attachment to any team in India, no passion. Delhi was beaten 4-1 but nobody came out crying, nobody cared.”

Kapadia said he was also concerned about whether the ISL was committed to fostering football in India at the grassroots level by working with existing domestic clubs. “That’s my biggest fear that, for the sake of glamour, there’s only room for the big foreign names not the Indians.”

Brazilian great Zico also urged the ISL to join forces with the existing domestic I-League to provide a much larger pool of Indian players. Organizers should also change the frenetic pace of the tournament—with 61 matches crammed into 10 weeks, he said. “It is very hard for the players, they can easily get injured.”

But Zico, Goa’s manager who has coached all over the world including in Japan, said he was confident the ISL would succeed. “This tournament is a very big success for the public, television, marketing, I really believe it can help the development of India’s football,” he said.

Some gathered at the Delhi stadium remained skeptical. With tickets only Rs. 200 rupees each, university student Kritika Khurana decided to treat her brother Kartik, 11, and his friend to a new experience. “Yeah it’s okay,” Kartik said. “But cricket is much better than this.”

Haha, God, u guys are jealous, this coming 4m a country who has a “homeground” in UAE.
IPL started the same way, now look at the popularity, it will take time, just like wid every new thing.

The writer has cleverly tried to diffuse the hype and excitement created by the ISL for the sake of something that he wrote at the end of his report (“Yeah it’s okay,” Kartik said. “But cricket is much better than this.” ). So they are scared. He only discussed about Delhi, but not about Mumbai, Chennai, Goa, Northeast, Cochin, and Kolkata because the attendances there will not support his views or point he is trying to prove..Even in Delhi official figure was 20000 way more than most leagues in Asia

The author has decided on ISL based on just attendance at Delhi. Delhi is not really a place for sports. Even the world cup hockey saw empty stands for non India matches.
The most biased article that one can ever read.

1)Official figures for that match showed attendance of 17000 though it appears less coz of Stadium capacity which is more than 60000 ..
2)even half full stadium will hold more than 30000 ..what is the point of lying Mr. Writer 3)people can watch the match highlights and crowd in the stadium on http://www.starsports.com...
4)y r u not talking about figures of Kochi staduim which is always close to 50000 and even in Kolkata which is raking up figures of more than 60000 ..
5)even Delhi in previous match recorded figures of more than 33000..
6)these figures are amazing considering that Indian team cricket matches were going on during this time ..people are not fools Mr. Writer , dont try to take them for a ride !

delhi was never a supporter of any sport, sans cricket. if you want to look at the crowd, see guwahati, all the matches were house full, nothing to tell about kolkata, we all know. look at chennai, and last but not the least, kerala, the entire stadium wasfull, drenched in yellow t shirts.
and as far as international stars are concerned, this year we got piero, anelka…next year, most probably, Henry . so, we dont care what misunderstanding you guys have, or doing it deliberately, but ISL is here for sure, and its going to stay here, for ever !!!
#LetsFootball

I think writer has written without doing any search , just after this article we have over 57000 fans drenched in yellow in Kochi …if u dont want to cover ISL then it is fine but dont spread lies and ur crazy imagination ..even Delhi games have seen far more crowd than wht u have quoted just turn to starsports.com ur lie can be seen by anyone ..just coz of stadium capacity which is more than 60000 ,,people appear less but still looks close to 15000-20000…go get a life u moron !

“1000” odd fans! Are you kidding? Please checkout the wikipedia, even in delhi which is a non footballing city has “13000” as lowest attendance, 13 times more than your estimate and did you consider only delhi, what about the other venues unsurprisingly kolkata, goa, mumbai and kerala and emeging venue like chennai. And what to say about northeast region where the stadium was mostly overpacked, even the local clubs have about 8,000 to 15,000 strong loyal fanbase. States like orissa and jharkhand are also football crazy people. Sorry to say but poor writing becoz, how can you come to conclusion on a negative note!