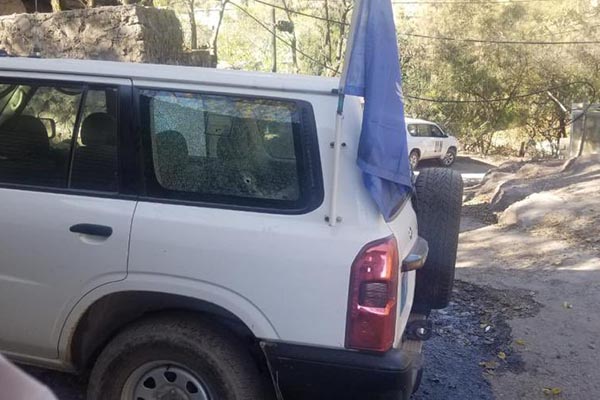 The Indian Army on Friday resorted to unprovoked firing at the Line of Control (LoC) dividing Kashmir between Pakistan and India, damaging a United Nations Military Observers (UNMO) vehicle, according to a statement issued by the Inter-Services Public Relations (ISPR).

According to the ISPR, all U.N. vehicles are “clearly recognizable even from long distances” because they are clearly marked and tend to be of the same type. “While the vehicle was damaged, the two UNMOs luckily remained unharmed,” it said. “They were safely rescued and evacuated by Pakistan Army to Rawalkot,” it added.

Stressing that the Indian Army’s action were a complete disregard for the principles enshrined in the U.N. Charter, the ISPR slammed the “illegal and unlawful” acts for being against all established international norms. “[These] signify mal-intent of Indian Army to target not only innocent civilians residing along the Line of Control but U.N. peacekeepers as well,” it said.

“It is indeed a new low for Indian Army. Pakistan Army stands in solidarity with UNMOGIP officials and appreciates the selfless services rendered by all members of UNMOGIP in discharge of their U.N. mandated duties,” it added.

“The reprehensible act of unprovoked firing by India on the UNMOGIP officers is indicative of a new low in the conduct of Indian occupation troops,” he said. He claimed India had committed 2,992 ceasefire violations thus far this year, resulting in 27 deaths and 249 injuries, including 92 women and 68 children.

He urged India to respect the Ceasefire Understanding, investigate incidents of deliberate ceasefire violations and maintain peace along the LoC and the Working Boundary. “Pakistan also urges India to allow UNMOGIP to play its mandated role as per the United Nations Security Council resolutions,” he added.

Earlier, in a press briefing from Abu Dhabi, Foreign Minister Shah Mahmood Qureshi warned that intelligence reports indicated that New Delhi was planning to stage a surgical strike against Pakistan. Terming the situation “sensitive,” he said Pakistan was aware of India’s conspiracies and vowed to respond to any military action “effectively.” He urged the global community to encourage India to show restraint, warning that its actions risked endangering regional stability.