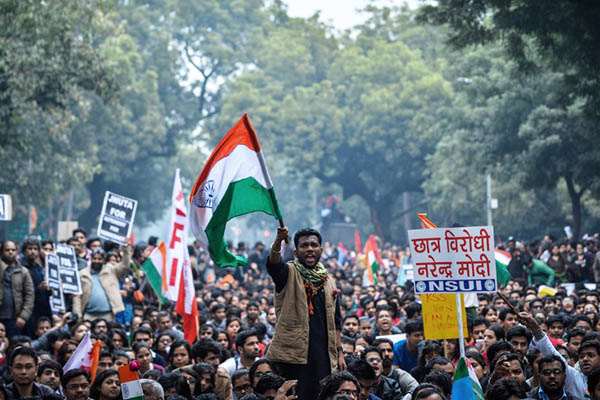 Official claims non-binding order has been issued to 20 public universities.

India’s government on Thursday told top public universities to fly the country’s flag on campus to promote national unity, as thousands protested in New Delhi against the arrest of a student for sedition.

The university at the center of the storm, Jawaharlal Nehru University (JNU), was among those directed to “fly the tricolor on a high mast,” said an official at the human resource development ministry, which includes education. “The flag will symbolize the unity of the nation under which our education system can flourish,” she told AFP on condition of anonymity, adding that the directive, issued to 20 leading public universities, was not a binding order.

It came as an estimated 5,000 people, chanting “release Kanhaiya Kumar” and “down with state terrorism,” marched through the center of Delhi in one of the biggest student protests India has seen in years. Police arrested the 32-year-old head of the JNU student union last Friday over a rally at which anti-India slogans were chanted. Kumar denies he was among those chanting the slogans and has apparently condemned the incident in a letter released by police.

But he had publicly criticized rightwing nationalism, and many of the protesters saw his arrest as an attempt to stifle dissent.

“We are today standing for human rights and freedom of speech. The government can’t dub people anti-national and dump them in jails,” said protester Avik Devdas.

Thursday’s protest march came a day after Kumar was attacked by rightwing lawyers as he was escorted into a hearing by police, prompting an intervention by the Supreme Court which had ordered police to ensure his safety. Journalists covering his case have been attacked and a panel of Supreme Court lawyers sent to investigate were heckled, with one describing an “atmosphere of terror” in the lower court.

Kumar was remanded in custody until March 2, but his lawyers have asked the Supreme Court to intervene and release him on bail. That case will be heard on Friday.

Students in several other cities including Chennai, Kolkata and Bangalore also held protests on Thursday in solidarity with Kumar and JNU, which has a long history of left-wing activism.

Staff at the university have condemned his arrest. Many went on strike this week in protest at what some said was an attempt to defame JNU.

There were also some counter marches by the student wing of the ruling Hindu nationalist Bharatiya Janata Party (BJP), which the opposition Congress party has accused of orchestrating the violence. And in the southern city of Chennai police arrested Kovan, a folk singer, and 47 members of a left-wing student group for staging a protest in front of a state government building.

On Thursday Congress vice-president Rahul Gandhi met India’s President Pranab Mukherjee to express concern, saying the scenes in court were an “affront to the democratic ideals of this country.”

Rights group Amnesty International has called for Kumar’s immediate release, accusing the government of using the British-era sedition law to “silence and harass those with divergent opinions.”

Sedition carries a maximum penalty of life imprisonment although convictions are rare. But police have defended their actions and say they are still searching for other JNU students who they say chanted anti-India slogans at last week’s rally. It was held to mark the 2013 hanging of Kashmiri separatist Mohammed Afzal Guru over a deadly 2001 attack on the Indian parliament.

A second scholar, the former Delhi University professor S.A.R. Geelani, was arrested on Tuesday on the same charge in connection with another event marking Guru’s death.

Protests against Guru’s execution have regularly been held in Kashmir, where many believe he was not given a fair trial. Guru always denied plotting the attack, which was carried out by Kashmiri militants.

Sedition charges have been used in the past against supporters of independence for the disputed territory of Kashmir, which is divided between India and Pakistan and claimed in full by both.