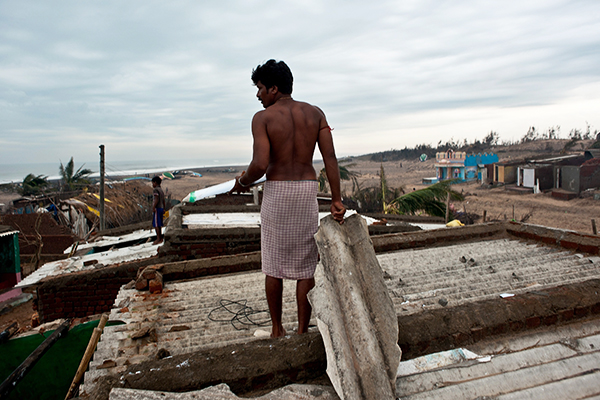 Sitting on a wall of his collapsed one-room house in eastern India, B. Chinnaya reflects on the devastation that Cyclone Phailin wrought on his once vibrant fishing village. “I built this house with my own hands, with my own hard-earned money,” Chinnaya said as he tried to replace the tin roof. “When I came back to the village, I couldn’t help but break down. All that hard work got washed away,” he said.

Chinnaya was among the one million residents from across Orissa and neighboring states who fled to shelter on Saturday in order to escape the ferocious storm which uprooted trees, mangled power lines, and flattened homes. While the biggest evacuation in Indian history was hailed for minimizing loss of life, already-poor fishermen and farmers returned to their villages this week to discover that the few possessions they had have been destroyed.

With both of his small, wooden fishing boats snapped in half by the cyclone’s storm surge and powerful winds, and no savings to repair them, Chinnaya was blunt about his future. “No boat means no fish. No fish, no money,” Chinnaya said in Gopalpur village, in the heart of the cyclone zone. “God had something against me, I think, else he wouldn’t have done this.”

Some 500,000 homes were partially or completely destroyed in the hardest-hit district of Ganjam which includes Gopalpur, officials said. Livelihoods including small businesses have also been wrecked, while inland, crops were flooded. Tarpaulins and plastic sheets were being distributed to those in need, along with basic food and water as part of a major relief operation under way across the region, officials said.

At a school in Gopalpur, dozens of children sat in lines, eating rice and lentils served on giant banana-leaf plates. “I like eating here. The food is very good,” said Santoshi Sahas, 11. “I don’t have an option really because we don’t have a kitchen at home anymore, no food,” she added.

The local municipality started stockpiling food after weather officials warned the cyclone, India’s biggest in 14 years, was barreling toward them from across the Bay of Bengal. A local official said there was enough food to feed 2,000 people for another 10 days. “We started stocking up a good four days in advance and it really paid off,” said Ashok Kumar Panda, the head of the local municipality. “Everyone is getting food, the kids are fed without fail while their parents repair their homes and then the parents eat. We will continue feeding them until everything becomes normal,” Panda said.

But he admitted power would not be restored to the area for another three weeks, perhaps longer. And residents fear little or no government compensation to help them start over.

Santosh Behra, 45, said he was unsure where he would find the Rs. 100,000 he estimates he needs to repair his small store and brick home, after the cyclone ripped off the thatched roof. “When I came back [from a shelter], most of the goods in my store were destroyed,” he said. “Soaked in water, all the dry foods went bad. I opened the door and all the branches and mud came floating out on me.” Behra added that he had not eaten in four days. “The question is how will I get everything fixed? I don’t have money and the government is nowhere in sight when we need some help.”