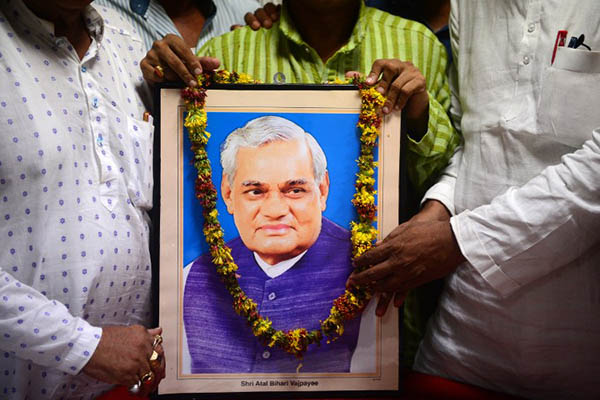 The 93-year-old had battled poor health for years but his condition deteriorated sharply in recent days, with doctors placing him on life support.

The sudden turn sparked a flurry of visits from top dignitaries, including Modi, who credited Vajpayee with laying the foundations for the meteoric rise of the rightwing Bharatiya Janata Party (BJP) which rules India today.

“Atal Ji’s passing away is a personal and irreplaceable loss for me,” Modi said in a tweet Thursday, using a Hindi-language honorific. “It was Atal Ji’s exemplary leadership that set the foundations for a strong, prosperous and inclusive India in the 21st century. It was due to the perseverance and struggles of Atal Ji that the BJP was built brick by brick.”

Vajpayee was being treated at the All India Institute of Medical Sciences (AIIMS) in Delhi, where he was admitted nine weeks ago. “Unfortunately, his condition deteriorated over the last 36 hours and he was put on life support systems. Despite the best efforts, we have lost him today,” AIIMS said in a statement. “We join the nation in deeply mourning this great loss.”

His body was being transferred on Thursday evening to his Delhi residence. Vajpayee will be cremated on Friday in the Indian capital with full state honors, BJP chief Amit Shah said.

The former journalist and poet-turned-politician was one of the few opposition lawmakers inside parliament when India’s first prime minister, Jawaharlal Nehru, still held office. His more than five-decade-long career peaked in the 1990s, when his masterful oratory attracted tens of thousands of people to his rallies across the country. He also became the first non-Congress leader since India’s independence in 1947 to complete an entire term in office as head of a BJP-led ruling alliance between March 1998 and May 2004.

Vajpayee’s often-conciliatory tone, and poetic jibes directed at opponents, were popular on both sides of the political divide. He was ousted in 2004 elections by the Congress Party, which selected Manmohan Singh as prime minister.

“Shri Vajpayee Ji stood among the tallest leaders of modern India, who spent his whole life serving our great country. His services to our nation will be remembered for a long time to come,” said Singh.

Many top ministers in India’s cabinet today—including Modi—were protégés to Vajpayee and his deputy Lal Krishna Advani. Many paid solemn visits to the ailing Vajpayee in his final moments on Thursday, including Foreign Minister Sushma Swaraj and Home Minister Rajnath Singh.

Vajpayee’s government helped ramp up tensions in South Asia by declaring India a nuclear-armed state after successful weapons tests in 1998 that drew sanctions from the west. The move prompted tit-for-tat tests by neighboring Pakistan and sparked concerns about a nuclear conflict in the region.

Months later, in early 1999, he embarked on a historic bus ride to the Pakistani city of Lahore and met then-premier Nawaz Sharif in a bid to ease tensions. But his peacemaker image was shattered later that year when Pakistan-backed forces pressed over the disputed Kashmir border, sparking a deadly conflict.

Despite the lingering tensions between the neighbors, Imran Khan, due to take oath as Pakistan’s next prime minister on Saturday, hailed Vajpayee as “a towering figure” in a statement posted on his Pakistan Tehreek-e-Insaf party’s official Twitter page.

“Atal Bihari Vajpayee’s efforts to improve Pakistan-India ties will always be remembered,” Khan said. “It is through the establishment of peace that we can truly honor… [his] legacy,” Khan added.

Vajpayee withdrew from the public eye after the BJP-led alliance suffered a shock election defeat in 2004. He had since rarely been seen or heard in public. It was widely reported that he suffered a stroke in 2009, which largely confined him to his New Delhi residence.

He continued to inspire devotion in many parts of the country, especially in key bellwether Hindu-heartland states in north and central India.