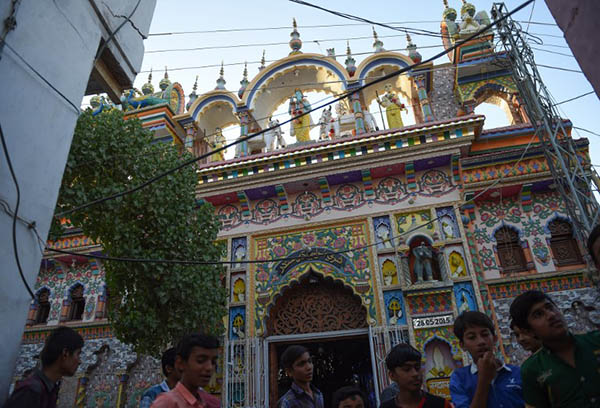 In Mithi, Muslims and Hindus live side-by-side and practice their respective faiths without any fear

Cows roam freely in Mithi, as in neighboring India. Considered sacred animals among Hindus, they embody the religious tolerance of this community in Muslim-majority Pakistan, where minorities can often face heavy discrimination.

Here, “Muslims respect the beliefs of Hindus,” said Sham Das, a 72-year-old pensioner. “They do not kill cows, or only in remote places, but not in Hindu neighborhoods.”

Cattle in Mithi live very well. They eat as they please, often from rubbish bins, and fall asleep on the roads. At times tuk-tuks and motorcycles navigate a weaving path around the animals. At others the traffic waits patiently for them to wake.

Mithi is a mostly Hindu city of 60,000 people, a rarity in a country where some 95 percent of the population is Muslim. As they enter Shri Krishna temple, the Hindu faithful ring a bell, the sound of which mingles with the azaan, the call to prayer for Muslims sounded just a few streets away.

A relaxed group of young Hindus talk outside the colorful, intricately carved exterior, where not a single guard is employed. It is a sharp contrast to the Hindu neighborhoods in Karachi, some 300 kilometers away, which are under armed surveillance.

Vijay Kumar Gir, a Hindu priest in Karachi, said that of the 360 temples in the city, merely a dozen are still functioning. “The rest of them have been shut down and their land is being encroached,” he said.

It is a bleak situation that is far more representative of the stigmatization Hindus face across Pakistan, where they are often assumed to be “pro-India because of their religion,” according to Marvi Sirmed of the Human Rights Commission of Pakistan (HRCP). “So they are always looked at with suspicion to be anti-Pakistan,” she added, referring to the tense relationship between the two countries, which have fought three wars since Partition in 1947.

The HRCP describes Pakistani Hindus as feeling “uneasy” in their country, saying in its annual report that “the migration of Hindus to India may soon turn into an exodus if the discrimination against them continues.”

According to the HRCP, which cites religious leaders, the biggest problem facing the community is the “forced conversion” to Islam of women and girls, many of whom are abducted before being married off to Muslim men. But none of this appears to affect Mithi, where Muslims and Hindus say they live together in harmony, even sending one another gifts and sweets to mark their religious holidays, residents say.

“Since I was old enough to reason, I have witnessed fraternity, love and harmony between Hindus and Muslims,” said Sunil Kumar, a 35-year-old businessman. “That has been going on for generations of our forefathers… it shall go on forever.”

The origins of Mithi’s peaceful existence are rooted in the geographical location of the city, which rose out of the sand dunes in the majestic Tharparkar desert that borders the Indian state of Rajasthan. Local researchers claim a group of peace-loving Hindus founded the town in the early 16th century, as war and looting raged all around.

The soil was not fertile and it was difficult to access water, so the city attracted only those of little means who had few other options. “We are the descendants of the original residents of this region, as positive and peace-loving as they were,” said Allah Jurio, a 53-year-old imam in Mithi, which is also renowned for its low crime rate. “Non-violence is inherently our second nature.”

But as religious extremism and hate speech flourish in Pakistan, and “faith-based violence in the name of religion continues unabated,” according to the HRCP, the fear that this oasis of tolerance may disappear is palpable.

Although Chandar Kumar, a 24-year-old Hindu computer scientist, sees no problems in the long-term among Mithi’s residents, he said “there are elements from outside who aspire to spread discrimination,” declining to elaborate.

Extremist groups, such as the Jamaat-ud-Dawah, labeled a terrorist organization by the U.N., are accused of being active in the area. “They want to end the unity,” said Kumar.