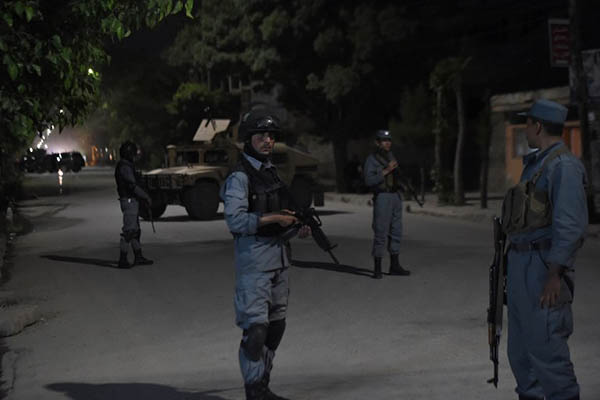 The Afghan Taliban justified targeting foreigners after a brazen hours-long siege on a Kabul guesthouse that killed 14 people, saying people from “invading countries” do not count as civilians.

Four Indians, two Pakistanis, an American, an Italian and a British-Afghan dual national were among those killed in Wednesday’s attack on Park Palace, located in downtown Kabul and popular with international aid agency workers. “Every foreigner from an invading country especially NATO is considered an invader. We don’t classify any of them as civilian,” Taliban spokesman Zabihullah Mujahid said in a Twitter posting on Friday. “The occupying forces should realize that… as long as they have a military presence inside our country… their civilian efforts will not find security,” he said, without referencing the Afghan civilians killed in the overnight attack.

The assault, which rattled the international community in the Afghan capital, came as NATO on Wednesday formally announced plans to retain a small military presence in Afghanistan after 2016 to help strengthen local security forces.

NATO Secretary-General Jens Stoltenberg said the future mission would be led by civilians and “will have a light footprint, but… [with] a military component.” Strongly condemning the announcement, Mujahid tweeted: “@NATO announced its mission after 2016 is ‘civilian’, so we’re not supposed to kill them anymore? while thousands of troops still remain.”

Kabul-based think tank Afghanistan Research and Evaluation Unit (AREU) mourned the loss of their American colleague Paula Kantor, who was killed in the guesthouse attack. “Paula gave her life here—like many other selfless heroes—to make sure millions of people, especially women, get a chance at a better life,” AREU said in a statement. “While we grieve her loss, we shall never forget the cause she gave her life to.”

The guesthouse attack sparked strong condemnation from Amnesty International, which said it was a “stark reminder of the Taliban’s contempt for human life” and reflected “a worrying new surge in the armed group’s targeting of civilians around the country.”

The Taliban have stepped up attacks on government and foreign targets since they announced their annual spring offensive late last month, vowing to “safeguard and protect the lives of civilians.” But it is Afghan civilians who are overwhelmingly paying the price for a surge in Taliban attacks, according to the United Nations Assistance Mission in Afghanistan (UNAMA).

In the first four months of 2015, civilian casualties from growing attacks jumped 16 percent over the same period last year, a recent UNAMA statement said. “These deliberate attacks on civilians are atrocities,” said the Georgette Gagnon, UNAMA’s Human Rights Director. “Taliban statements on avoiding civilian casualties ring hollow when we set them against the latest killings. The Taliban should abide by their commitments and immediately stop deliberately attacking civilians.”