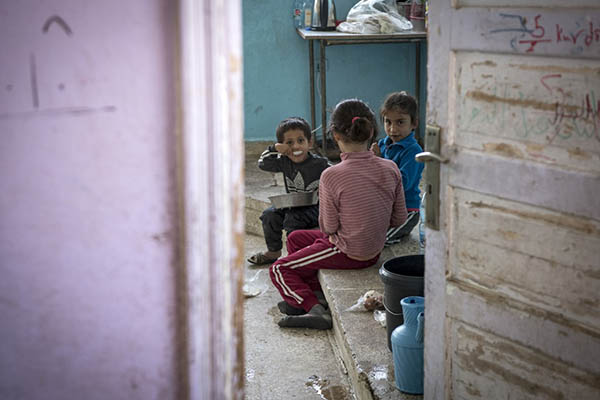 Displaced Syrian children eat inside a school turned into a shelter for people displaced by the war. Fadel Senna—AFP

Since fleeing a Turkish assault in northeastern Syria, Anwar has been living in constant anxiety—unable to return home or to tolerate life in a room with 20 others. The 35-year-old is one of hundreds of thousands displaced by a Turkish offensive against Kurdish forces in northeast Syria launched on Oct. 9.

Tens of thousands of them have sought refuge in and around the predominantly Kurdish city of Hasakeh, sleeping in schools, shelters and elsewhere. “We are staying here on top of each other, this is not life,” said Anwar, a Kurdish nurse who is sleeping in a repurposed school.

He and his family fled their home in a village close to the town of Tel Abyad nearly 200 kilometers away after the Turkish assault began. In the school, each classroom has been transformed into sleeping spaces for families, up to 24 people per room. The wails of children echo everywhere.

In the days after the family fled, looters raided their home, an Arab neighbor who stayed behind told Anwar. “Nothing is left in the house, they even took the [electrical] cables on the roof,” he said. “How can we go back?” he asked. “If we go back, we’ll have to sit in our homes, take up arms and guard them.”

Displaced residents and the Syrian Observatory for Human Rights, accuse Turkish-backed Syrian rebel groups of abuses, theft and looting in the areas they have seized. A witness in the battleground town of Ras al-Ain, which Turkish forces captured last week, said he saw fighters stealing abandoned motorcycles and pickup trucks.

The Turkish assault, which followed a surprise U.S. announcement that it would withdraw its forces, saw Ankara seize more than 100 kilometers of territory along the Syrian-Turkish border. Around 300,000 people have been displaced, according to the Britain-based Observatory.

Ankara has agreed ceasefire deals with the United States and Russia that will see the Kurds withdrew from much of the territory they held in northeastern Syria, their traditional stronghold.

Anwar, a father of six children between 12 and six months, sees no way home and wants to leave Syria for good. “We want to go to Iraq, there is no other solution in front of us,” he said.

Around 9,000 Syrian Kurds have crossed into the Kurdish region of Iraq since the Turkish assault began, according to the United Nations. But the route isn’t easy, and smugglers charge around $250 a person, Anwar says—money he simply doesn’t have.

In the school, the names of the displaced families are stuck on the doors. The rooms are sparse, with only a few blankets. In the outdoor schoolyard, women wash dishes and clothes, while children play in the school’s colorful hallways.

Abu Helene, 50, who fled from Ras al-Ain, said he was worried about the future of his 16-year-old daughter, who was forced to drop out of school. “All the houses are open and there is a lot of looting,” was the news he heard from home.

Amnesty International has said that Turkish forces showed a “shameful disregard for civilian life” during the assault.

While Ankara was targeting the Kurds, whom they accuse of supporting outlawed separatists inside Turkey, thousands of Arabs also fled the violence. “When the planes bomb, they don’t differentiate between Arabs and Kurds,” said Ali Abdullah, a 30-year-old Arab who fought alongside the Kurdish-led forces.

At another school transformed into a shelter for the displaced, Najme Ahmed, 43, said she just wants to return, regardless of the looting. “They can take everything, just leave us the walls to return to,” she said.