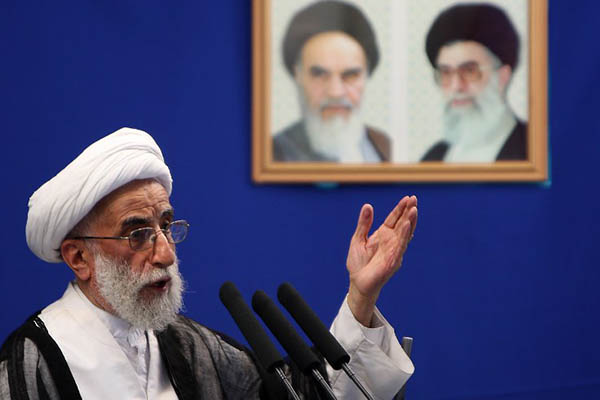 As Iran’s foreign minister embarked on a diplomatic tour on Sunday to save the nuclear deal, his government faced mounting pressure from hardliners at home who say the West should never have been trusted.

Ayatollah Ali Jannati, the ultra-conservative head of the Assembly of Experts whose responsibilities include choosing the next supreme leader, said the government had already failed to guarantee the country’s interests.

President Hassan Rouhani, the key architect of the 2015 agreement, should “present his apologies to the Iranian people for the damage caused in the cadre of the nuclear deal,” Jannati said.

Foreign Minister Mohammad Javad Zarif arrived in Beijing on Sunday for the first stop of his tour of the remaining members of the nuclear deal. He is due in Moscow and Brussels in the coming days.

Mirroring the line taken by supreme leader Ayatollah Ali Khamenei, Jannati said there was little chance the Europeans would provide the assurances needed for Iran to stay in the deal.

The Europeans “have never stopped taking actions against Iran,” he wrote.

“I hope recent events will lead us ending our trust in the West and the Europeans. The Europeans have repeated on several occasions that they will not be able to resist U.S. sanctions,” said Jafari, according to the conservative Fars news agency.

Around 100 Iranian lawmakers have also signed on to a parliament bill that would set a clear deadline for the government to “obtain necessary guarantees from the Europeans” without which Iran would resume high-level uranium enrichment, according to parliament’s official website.

Although conservatives have tried to score political points against Rouhani in the wake of the U.S. withdrawal, the president has essentially taken the same line.

Immediately after U.S. President Donald Trump’s withdrawal from the deal last Tuesday, Rouhani said he had instructed Iran’s Atomic Energy Organization to prepare for “industrial enrichment without limit” unless Iran’s interests were guaranteed by the remaining parties.