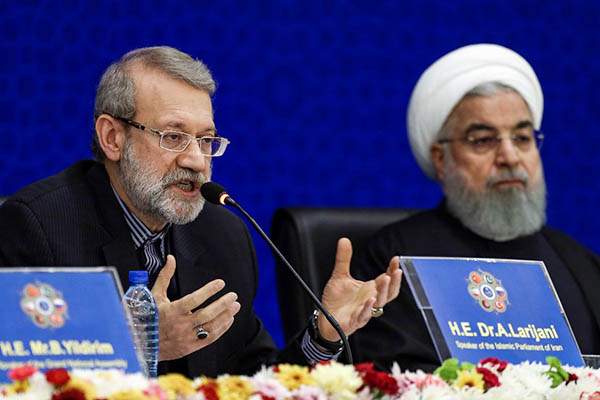 Iran’s parliament speaker hinted on Sunday that Washington could be behind the “suspicious” tanker attacks in the Gulf of Oman to pile pressure on Tehran, official news agency IRNA reported.

“The suspicious actions against the tankers… seem to complement the economic sanctions against Iran considering that [the U.S.] has not achieved any results from them,” Ali Larijani told M.P.s. He backed his claim by saying there had been a precedent “during World War II, when Americans targeted their own ships near Japan to create an excuse for hostility.”

A non-belligerent state at the beginning of World War II, the U.S. went to war after Japan’s surprise attack on the American Pearl Harbor base in Hawaii on the morning of Dec. 7, 1941.

A Japanese-owned tanker, the Kokuka Courageous, and a Norwegian-operated one, the Front Altair, were attacked on Thursday and left ablaze as they were passing through the Gulf of Oman. Washington accused Tehran of being behind the attacks, that took place at the same time that Japanese Prime Minister Shinzo Abe was in Tehran for talks aimed at defusing tensions between Iran and the United States.

Iran’s Foreign Minister Mohammad Javad Zarif dismissed the U.S. claim as “baseless” and said Washington had “immediately jumped to make allegations against Iran—[without] a shred of factual or circumstantial evidence.”

Iran has been locked in a bitter standoff with the United States since Trump withdrew from a landmark 2015 nuclear deal in May last year. Washington has since re-imposed crippling unilateral sanctions on Tehran—targeting crucial parts of Iran’s economy, especially the banking and oil sectors—and launched a military buildup in the Gulf.