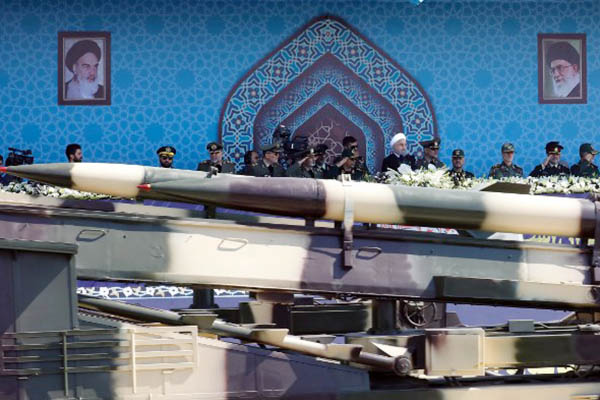 Spokesman for armed forces says U.S., Europe must destroy their weapons before demanding Tehran does the same

Iran’s armed forces spokesman said on Saturday that there could be no talks on the country’s missile program without the West’s destruction of its nuclear weapons and long-range missiles.

“What Americans say out of desperation with regards to limiting the Islamic republic of Iran’s missile capability is an unattainable dream,” Brigadier General Masoud Jazayeri told the official IRNA news agency. “The condition for negotiations on Iran’s missiles is the destruction of America’s and Europe’s nuclear weapons and long-range missiles.”

Jazayeri said U.S. criticism of Iran’s missile program was driven by “their failures and defeats in the region.”

French Foreign Minister Jean-Yves Le Drian, who is due to visit Iran on Monday, said last month that its missile program and involvement in regional conflicts needed to be addressed if Iran “wants to return to the family of nations.”

Ali Akbar Velayati, foreign policy adviser to supreme leader Ayatollah Ali Khamenei, criticized Le Drian’s position on Saturday, just two days before they are expected to meet. “Iran’s defense program is not the concern of other countries such as France, that they should come and tell us what missiles we can have. Do we tell France how it should defend itself?” he told the semi-official ISNA news agency. “If Le Drian’s visit is aimed at reinforcing our relations, he would do well to avoid negative positions,” Velayati added.