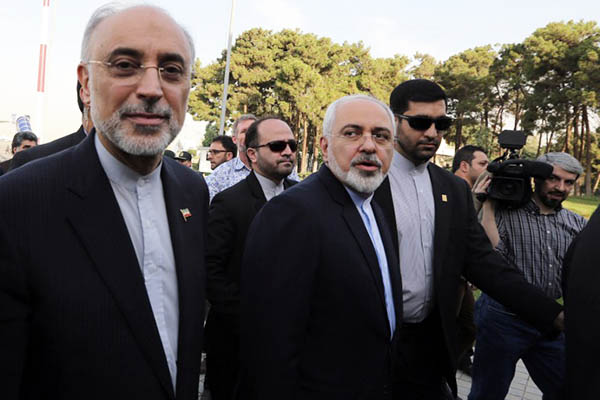 Iran by agreeing a pact with world powers has accepted temporary curbs on its nuclear program, but it has not abandoned atomic research and long-term uranium enrichment plans. When the 10-year limitations of Tuesday’s deal expire Iran will be able to use the more modern centrifuge technology it insisted on being able to develop under the agreement struck in Vienna.

The quid-pro-quo of a deal now for better technology later was one of the biggest criticisms from the accord’s opponents; Israel maintains it grants Iran the means to obtain a bomb faster than before.

Iran, meanwhile, insists its nuclear activities are strictly civilian in nature and that it will produce the fuel needed for its Bushehr power plant on the Gulf coast.

Under the Vienna agreement, Iran can resume research and development on future IR-6 and IR-8 centrifuges, which are far more efficient than the IR-1 machines currently in place. Iran’s higher-level uranium enrichment was suspended as part of an interim nuclear agreement with the West in November 2013. But Tehran’s longer-term goals are well known.

Ali Akbar Salehi, head of Iran’s Atomic Energy Organization (IAEO), has said it will take “eight to 10 years” to develop the new centrifuges, said to be 24 times more powerful than the IR-1. The issue of enrichment is particularly sensitive because uranium when processed at high doses becomes viable for a nuclear weapon.

Iran has agreed to limit its enrichment to less than five percent during the nuclear deal—it had been at 20 percent and nearing bomb-level purity before an interim accord took effect in January 2014. But Iran eventually aims to have an enrichment capacity of 190,000 SWU (separative work units)—almost 20 times the current capacity.

Its supreme leader Ayatollah Ali Khamenei outlined the target in July 2014. “With the old IR-1, we will have 190,000 machines to achieve this capability, but with the IR-8, it will take about 9,000. It’s a big difference,” said an Iranian official.

Other considerations make the older centrifuges impractical: the only enrichment site Iran will be allowed to keep after the deal, Natanz, south of Tehran, can only hold around 50,000 machines.

Experts also say Iran’s current nuclear equipment is obsolete. “The IR-1 centrifuges are a bit like old Citroens of the 1930s. They are 40 times less powerful than a European centrifuge,” said a Western nuclear expert familiar with Iran’s nuclear program.

Several Iranian officials, including lead negotiator Abbas Araghchi, spoke of having in the future an “enrichment capacity of one million SWU” to feed five nuclear reactors of 1,000 megawatts each. “It is a mistake to be restricted to IR-1,” said Behrouz Kamalvandi, the IAEO’s spokesman in Tehran before the Vienna deal. “Each type of centrifuge—IR-5, IR-6, IR-7 and IR-8 we fought for days on,” he said of the earlier talks in Lausanne in April where the framework for the final deal was thrashed out.

Opponents of the final agreement, particularly, Israel, U.S. Republicans and the Gulf Arab monarchies, argue that any increase in capacity will allow Iran to reduce to a few weeks the “breakout” period to build an atomic weapon, compared to a year during the deal’s duration. But under the Vienna deal, Iran agreed to reduce to its number of IR-1 centrifuges from nearly 19,000 (less than half are in use) to just over 6,000.

To further reassure the international community, Iran will also change its heavy water reactor at Arak to reduce the amount of plutonium it makes, another potential source of fissile material for a bomb. There will also be extensive checks of Iran’s nuclear facilities, particularly with the implementation of the Additional Protocol (AP) of the Non-Proliferation Treaty, and “managed access” at military sites.

The AP allows short-notice inspections by the International Energy Agency Atomic Agency (IAEA), the U.N. nuclear watchdog. “We can develop our program without restriction” after the 10-year period of limitation, said Araghchi, one day after the Lausanne agreement paved the way to Tuesday’s final deal.