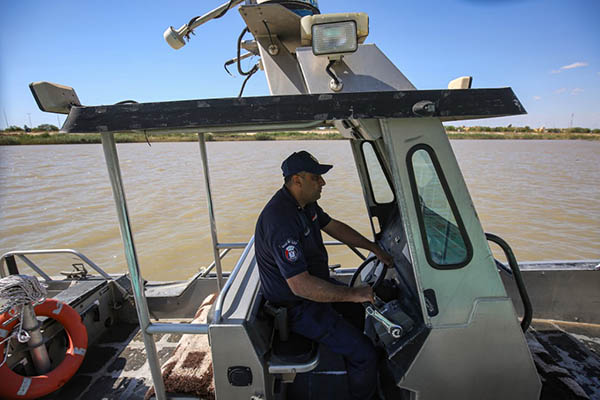 An Iraqi policeman pilots a speedboat on patrol to prevent people attempting suicide from jumping in the Tigris river. Ahmad al-Rubaye—AFP

Nada never spoke about her suicide attempts and Ahmad hesitated before sharing his story, but as cases rise in Iraq the taboo issue is being pushed out of the shadows. Kept from school and sexually abused by her brothers, 24-year-old Nada, who first tried to take her own life at the age of 12, only agreed to speak about her experiences under a pseudonym.

“I didn’t see a light at the end of the tunnel,” she told AFP. Over the next decade, she attempted suicide more than 30 times, either by swallowing pills, cutting, or trying to hang herself. Now married to an abusive husband and a mother of two young children, Nada has yet to see a mental health specialist.

“I never told anyone,” she said.

Almost 200 people took their own lives in Iraq in the first four months of 2019, according to the government’s Human Rights Commission. This follows a rise in suicides from 383 in 2016 to 519 last year recorded by the parliament’s human rights committee.

The increase in cases, some of which were broadcast on social media, is forcing political, religious and media institutions to grapple with the problem primarily affecting Iraq’s youth. And the real numbers could be even higher, as relatives of those who try to end their lives often refrain from reporting cases to authorities to avoid public shaming.

Suicide is forbidden by Islam—Iraq’s official religion—as well as by minority religions in the country.

For Ahmad, a 22-year-old from Nasiriyah, south of Baghdad, his family forbidding him to marry the neighborhood girl he loved pushed him to attempt suicide twice using poison. “I had nothing left but suicide, as my parents don’t understand marrying for love,” he told AFP.

Iraq has been battered by nearly four decades of instability, barely allowing communities to recover from one conflict before being slammed with another.

Social pressures and staggering unemployment also play a role. Among Iraqi youth, 17 percent of men and 27 percent of women are out of work, according to the World Bank. “Suicide is increasing among adolescents and young adults because they are the most unhappy demographic when it comes to employment, education, and care,” said Amal Kobashi, who heads the Iraqi Women’s Network and has followed the issue. “Until now, there are no real government mechanisms to resolve the reality of this demographic. This could be pushing them to desperation and suicide,” she told AFP.

In recent months, gruesome videos have emerged on social media of young Iraqis broadcasting suicide attempts live, including by hanging, jumping off bridges or using firearms.

Kobashi said they could be cries for help in a country with few mental health resources and where therapy is still seen as a last resort for people deemed by some as “crazy.”

“Some resorted to social media to bring attention to their situation so people would empathize,” Kobashi said, adding that could ultimately be a “positive” outcome.

An Iraqi mental health specialist, speaking anonymously to discuss sensitive cases, confirmed she was seeing more youth among her patients. She suspected that the current period of relative stability meant Iraqis were finally coming to grips with their trauma.

“We spent years just on survival mode, trying to get through terrorism. So now, people are finally starting to pay attention to other social trends,” the specialist said.

As more cases come to light, media outlets, including state television, have hosted special programs on suicide, bringing the issue into mainstream discussion. Government officials have also taken notice and the country’s top religious authority for most Shias, Grand Ayatollah Ali Sistani, has demanded authorities “work on resolving these issues.”

But there is a lingering “lack of sensitivity” on mental health issues, the specialist warned. “Suicide is being talked about more, but not always in a healthy way. There are clerics who blame it on a lack of faith,” she said. “That doesn’t help victims or their families.”

She called for suicide hotlines, television advertisements about mental health resources and increased support for psychiatric wards in a country with just three psychiatrists per every one million inhabitants.

Some stopgap measures have been taken, including dispatching police patrols to Baghdad’s bridges and erecting metal barriers to stop anyone trying to jump. A senior police source told AFP that authorities had rescued 36 people, mostly men, attempting suicide between January and April.

Others have not been so lucky. On a day in mid-July, two men and one woman took their own lives in Baghdad, a police source said. In another incident a woman threw her five-year-old son off a bridge straddling the Tigris River in the capital then jumped herself, holding her second child, said Mohammed al-Rubaye, former head of Baghdad’s first responders. “The police were able to save her and one of the children, but the second one drowned,” he said.