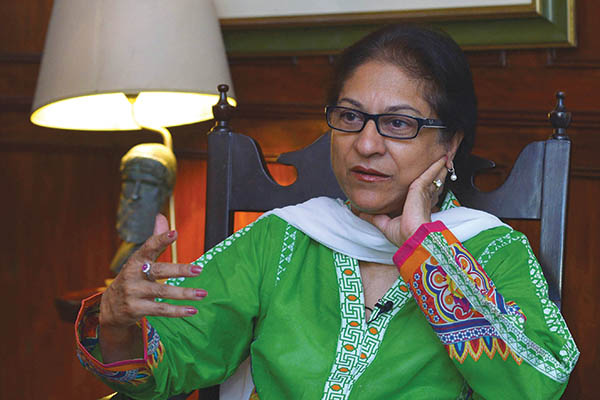 Often at odds with Pakistan’s religious right and the security establishment, it is a testament to the strength of Asma Jahangir that she managed to extract victories from a grudging state that awarded her its highest civilian honors, the Sitara-e-Imtiaz and the Hilal-e-Imtiaz, despite her principled challenging of its cherished values. For many of her detractors in her homeland, the sharpest rebuke was that she was a woman in a society where bearded men dominated and could bring the state to its knees. The rest of the world responded by shunning Pakistani voices that branded her a “Jewish agent” and making her a U.N. Rapporteur for Human Rights who was showered with awards: the Right Livelihood Award, the Freedom Award, the Ramon Magsaysay Award, the Martin Ennals Award for Human Rights Defenders, the UNESCO/Bilbao Prize for the Promotion of a Culture of Human Rights, as well as the French Legion of Honor.

Daughter of Malik Ghulam Jilani, a man who fought dictatorship, she was a consistent critic of military rule that repeatedly involved Pakistan in wars that ended in defeats. Throughout her 65 years, she saw generals damaging Pakistan’s flailing governments through decade-long bouts of power as democratically elected prime ministers were ousted from power before completing their terms. Her most devastating blow against this status quo was the foundation of the Human Rights Commission of Pakistan in 1987 after fighting military ruler General Zia-ul-Haq’s Hudood laws in the streets of Pakistan with her Women’s Action Forum. The deep state could have gotten her killed through “enemy” terrorists—at least one such attempt was highlighted by her—but had to suffer her because of her status at the United Nations. As The New York Times noted after her untimely passing: “In 2012, Jahangir said that an assassination plot against her had been hatched at the highest level of the security establishment.”

Jahangir’s refusal to allow personal enmity to stand in the way of her principles earned her fans even among those ideologically aligned against her. Ousted prime minister Nawaz Sharif, born from the loins of military dictatorship, hated her like other dominant conservative elements in the country, but grew to admire her after his own political metamorphosis. The lawyers’ community, dominated by violent, small-city vandals, also learned to respect her as she was elected the first woman to head the Supreme Court Bar Association in 2010.

Alongside her sister, Hina Jilani, Jahangir established Pakistan’s first all-women legal practice in 1980. Seven years later, the two set up AGHS Legal Aid, the first free legal aid center in Pakistan, challenging all laws and customs aimed against women and minorities. Despite these successes, it was her persistent questioning of the Pakistan Army’s policies that sparked hatred from the deep state. Writing for daily Dawn in 2012, she foreshadowed the “Dawn leak” controversy that plagued Nawaz Sharif’s government:

“It is reprehensible that any country should violate the territorial integrity of another; but it is even worse for a country to allow non-state intruders to dictate state policies under the threat of violence and for the government to swallow it meekly. Under the present circumstances, there are greater chances of the transition to democracy rolling back, rather than an improvement in this climate of political bickering. A reversal of the system will sweep with it all the so-called citadels of free expression, the rule of law and political democracy unless urgent and sustainable political and economic measures are taken.”

A champion of democracy, Jahangir was no fan of the dharna politics that have become so popular in Pakistan in recent years. She condemned Imran Khan’s serial sit-ins for behind-the-scenes manipulation designed to destabilize Pakistan. She also blasted judges who showed off their loyalty to the deep state with flamboyant fictional references in judgments that dismissed Sharif from office. She wrote about her bitterness over the subjugation of the judiciary in 2015:

“The fight against terrorism in Pakistan has taken a toll on civil-military ties. To avoid confrontation, the government often gives in to the military’s demands. Parliament too passed a constitutional amendment, temporarily allowing military courts to try civilians linked to terrorism. The amendment was challenged in the Supreme Court by members of civil society. After a much-awaited judgment, the petitions were predictably dismissed. Perhaps it is difficult to imagine any judiciary in Pakistan assuming it can override a powerful military’s desires.”

Her bluntness and principles were often a bitter pill to swallow for Pakistanis more accustomed to black and white ‘us vs. them’ narratives. Her death prompted an outpouring of support on social media, but there were likewise disparagers who sought to insult her memory and her accomplishments. Fortunately, Jahangir was much bigger than just Pakistan. U.N. Secretary-General Antonio Guterres paid tribute to her, calling her a “human rights giant,” as newspapers across the world published obituaries praising a woman who fought against tough odds knowing full well that there was no guarantee of safety.

As U.N. Rapporteur, she visited many countries in Africa, and East Timor in Southeast Asia, but it was her visits to India that attracted the most ire, proving controversial even after her death. She had investigated human rights violations in Mumbai and Gujarat and had in particular interviewed infamous Hindu fundamentalist Bal Thakeray in this connection. A picture of the two—both wearing saffron colors—has been distributed on social media in a bid to defame her posthumously. But no one has bothered to look at the negative report she returned to the United Nations following her trip.

At times condemned for focusing on human rights violations in Pakistan over those in our neighboring states, Jahangir was steadfast. “Yes, I am very unhappy, extremely anguished at human rights violations against Kashmiris in India or against Rohingyas in Burma or, for that matter, Christians in Orissa. But obviously I am going to be more concerned over violations taking place in my own house because I am closer to the people who I live with. I have more passion for them,” she told Herald magazine.

Asma Jahangir may no longer be with us, but that passion, her desire to fight for the disenfranchised, will never die. Her supporters in Pakistan, as well as the rest of the world, must ensure it does not.

Imran Khan is the Prime minister of Pakistan but his struggle was more than 22-years. Initially, he tried to fight alone but after some time he used political techniques to get the goal. Now PMLN-Q and MQM are just doing leg-pulling and poor people are suffering from it!…