Ignore the slanted media reports in Pakistan these days about how India is stealing Pakistan’s Chenab River waters by building numerous dams over it for the generation of electricity. These reports ignore the fact that the Indus Waters Treaty of 1960 allows upper-riparian India to dam the rivers allocated to Pakistan, according to certain specifications, to produce electricity without any diversion of waters that belong exclusively to Pakistan.

Saiyid Ali Naqvi’s Indus Waters and Social Change: the Evolution and Transition of Agrarian Society in Pakistan (Rs. 2,900, Oxford University Press Pakistan) looks at Indus waters and their importance to Pakistan. Anyone who wants to know the real story of each Pakistani river and its irrigation barrages should read this 796-page work from the former Asian Development Bank officer who worked on a number of water resources and rural development projects in the Philippines, Sri Lanka, Nepal, Laos, Vietnam, China, Indonesia, and Pakistan. 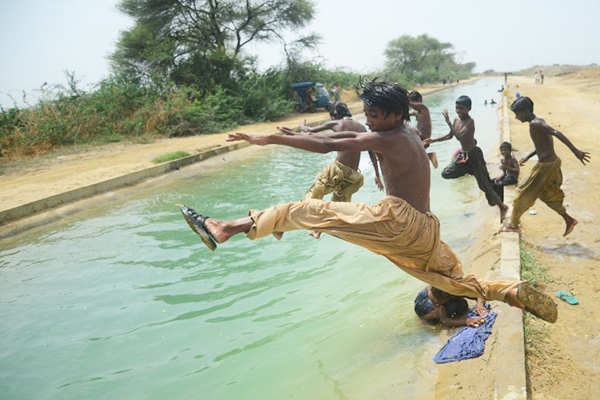 Pakistan is lucky as a lower riparian to have a water treaty with upper-riparian India; and the book tells us what we went through before it was finally signed in 1960.

The Inter-Dominion Agreement on the Canal Water Dispute, signed by India and Pakistan at New Delhi on May 4, 1948, restored the canal water flows that India had choked off. Through this agreement, India made clear its intent to use all of the water of the rivers in question; the agreement merely allowed Pakistan time to find alternative sources to replace the lost water.

To make matters worse for Pakistan, its West Punjab government was notified by India’s East Punjab government that this agreement would be discontinued on Sept. 4, 1948. Pakistan’s foreign minister appealed to the Indian prime minister, Jawaharlal Nehru, to continue water supplies to West Punjab and to the Sindh irrigation systems until the two governments could reach a final agreement. Nehru responded that supplies would be continued temporarily, and with no commitment for the future.

A further indication of India’s intentions came when construction work began in late 1948 on the Harike Barrage, upstream of the Ferozpur Barrage, at the confluence of the Beas and Sutlej. It was clear that the Harike Barrage would make it possible for India to completely abandon the Ferozpur Barrage and shut down supplies of water to Pakistan’s Sutlej Valley canals. Pakistan tried to appeal to the International Court of Justice in June 1949, but India refused to participate. Instead, India urged that the Inter-Dominion Agreement of May 4, 1948, be made permanent.

Then came the Indus Waters Treaty, leveraged with funds from the World Bank for new canals and dams for the two newly-independent but financially broke states. The Treaty said: “India shall be under obligation to let flow all waters of the western rivers, and shall not permit any interference with these waters, except for the following uses, restricted in the case of each of the river drainage basins of the Indus, Jhelum, and Chenab: (a) domestic use, (b) non-consumptive use, (c) specified agricultural use, and (d) generation of hydroelectric power.”

Pakistan and India need normalization of relations, followed by free trade and territorial connectivity, to cooperate on the fast-depleting waters of South Asia. Pakistan has lost all cases of arbitration it has brought against India so far, which simply proves that the media is once again favoring war with India instead of peace. Slanted media reports about India stealing Pakistan’s waters are planted to cause alarm and resultant jingoism for another war with India that Pakistan will surely lose.

not an outright war – i think will focus on strategic strikes (read : using non-state actors) to blow up some of the damns there!

Dear Mr. Bhatti,
It is clearly so amusing for us Indians to read and hear Pakistani youth like yours talking of using terrorism as a state policy so easily. Really amusing to see the nation’s youth’s attention away from malnutrition, misery, poverty, child abuse, ill treatment of women, abject poverty, religious bigotism, lack of sanitation, broken down educational system, non existent public health facilities ….and what not…….to India and terrorism.
I have an idea, why don’t you focus on improving the abject state…strengthen yourself for the next two decades and then come and fight with us…it will be aright of equals…we will wait…..

Dear BDPA,
The policy of using non-state actors [read: terrorism] was introduced by India as early as 1950, when India moved into lawless Afghanistan to use that soil to needle Pakistan’s international borders adjoining the Pakistani provinces of Balochistan and NWFP. Pakistan at the time posed no threat to India whatsoever in any way. The dispute between the two countries was limited to Kashmir which was then on the UNSC agenda. New Delhi expanded that conflict by moving into Afghanistan to harass Pakistan into abandoning pursuing Kashmir at the UN. That’s how the use of non-state actors [read: terrorism] was introduced in the region. India continued this policy up until 1970s, 80s and 90s. Several Indian terrorists working for the Indian government, like Sarabjeet Singh and Surjeet Singh, were arrested by Pakistan and charged with executing a wave of terror across Pakistani cities using local recruits. So, please, next time, know India’s terror record before lecturing us on India’s water terrorism against Pakistan.

It is obviously so entertaining for us Indians to peruse and hear Pakistani youth like yours discussing utilizing fear based oppression as a state strategy so effectively. Truly diverting to see the country’s childhood’s consideration far from unhealthiness, wretchedness, neediness, youngster misuse, abuse of ladies, contemptible destitution, religious bigotism, absence of sanitation, separated instructive framework, non existent general wellbeing offices … .and so forth… … .to India and psychological warfare

Extraordinary data you shared. I am so honored to see this. Continue sharing such helpful substance.

Unprecedented information you shared. I am so respected to see this. Keep sharing such a supportive substance.

Pakistan and India need standardization of relations, trailed by organized commerce and regional availability, to collaborate on the quick exhausting waters of South Asia. Pakistan has lost all instances of discretion it has brought against India up until now, which essentially demonstrates that the media is by and by preferring war with India rather than harmony. Inclined media reports about India taking Pakistan’s waters are planted to cause alert and resultant patriotism for another war with India that Pakistan will without a doubt lose.