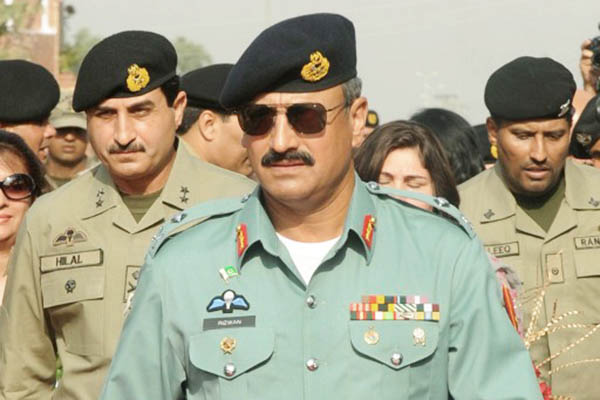 Peace talks with Afghan Taliban expected to be on Lt. Gen. Rizwan Akhtar’s agenda during meeting with U.S. intelligence officials.

Pakistan’s spy chief has left on an official trip to the United States, the military said Wednesday, with possible peace talks between Afghanistan and the Afghan Taliban likely to be on the agenda.

It is Lieutenant General Rizwan Akhtar’s first official visit to the U.S. since taking charge of the Inter-Services Intelligence (ISI) agency last year. The trip comes days after President Barack Obama’s new Pentagon chief said the U.S. was seriously considering slowing the pace of a troop withdrawal from Afghanistan.

Pakistani support has been seen as crucial in recent moves to persuade the Taliban to talk to the Afghan government to end their 13-year insurgency.

The brief military statement announcing Akhtar’s trip said only that he would “discuss issues related to intelligence” with his counterparts, whom it did not name. But Pakistani security analyst Hasan Askari said the meetings would almost certainly touch on the issue of Taliban talks.

“The possibility of dialogue between the Afghan Taliban with Kabul and U.S., with special reference to any help that Pakistan could extend to facilitate the process, will figure prominently at the talks in Washington,” Askari said.

He said the ISI chief would brief his U.S. counterpart and other senior defense officials about the recent improvements in Islamabad’s ties with Kabul, and the ongoing cooperation between the two countries on border control.

Relations between Afghanistan and Pakistan have long been frosty, fueled by Kabul’s bitterness at Islamabad’s backing for the Taliban. Pakistan was one of only three countries to recognize the Taliban regime that ruled Afghanistan from 1996 until it was ousted by a U.S.-led invasion in 2001.

Afghan Chief Executive Abdullah Abdullah hinted earlier this week that talks with the insurgents could begin soon. The moves toward talks have coincided with the U.S. reconsidering the pace of its troop withdrawal.

The U.S.-led NATO force ended its combat mission in Afghanistan in December but a residual force has stayed on for training and anti-terror operations. Under the current plan, the 10,000-strong U.S. force will drop to roughly 5,000 by the end of 2015 and then pull out altogether by the time Obama leaves office in two years. But the Obama administration has already delayed the pace of the withdrawal, allowing 1,000 additional American forces to remain this year.