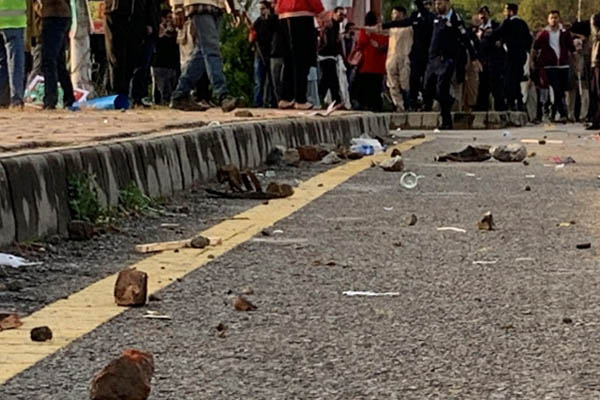 Police in Islamabad on Monday registered a case against 12 men for trying to disrupt the Aurat March while it was underway in the federal capital a day earlier.

On Sunday, participants of the ‘Haya March,’ a counter-protest organized by students of the Jamia Hafsa madrassa, threw stones at members of the Aurat March and shouted slogans against them, forcing police to intervene. One person was injured in the assault, which occurred as the Aurat March was underway in an area designated for it by the Islamabad administration.

According to the FIR, the men were in violation of the Pakistan Penal Code’s Section 147 (punishment for rioting); 149 (members of unlawful assembly are guilty of offense committed for a common object); 186 (obstructing public servants in discharge of public functions); 188 (disobedience to order duly promulgated by public servant); 341 (punishment for wrongful restraint); 353 (assault or criminal force to deter public servant from discharge of his duty); and 298 (uttering words with deliberate attempt to wound religious feelings). It does not factor in Sections 351-352, with deal with criminal assault, despite one person being injured by the attackers.

The FIR states that leaders from various politico-religious parties and students from madrassas had illegally occupied the road across the National Press Club and had not obtained a no-objection certificate required to take out a protest in the federal capital. It also states that the leaders of the so-called ‘Haya March’ incited violence against participants of the Aurat March, which resulted in some people throwing stones and sticks at the marchers. The attacks also tried to enter the designated area of the Aurat March by using force against security officials deputed to maintain the peace, it added.

The FIR follows promises by the Islamabad administrator to register a case against the people who had attempted to disrupt the Aurat March. “After inquiry people will be arrested. The Islamabad police worked very hard to ensure that situation stays in control but few elements broke the law and they had no NOC,” Shafqaat posted on Twitter on Sunday.