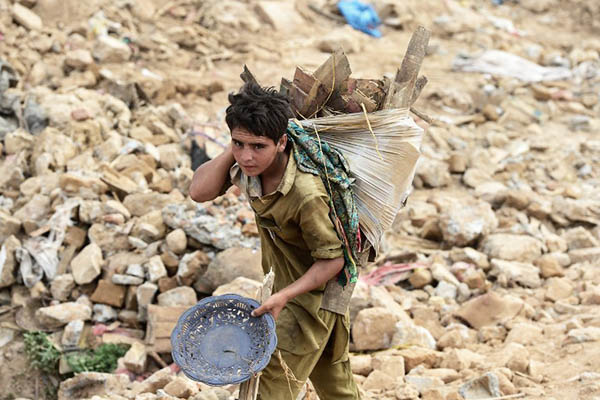 CDA admits it has no plans for resettlement of the nearly 15,000 people who have been left homeless.

Ashrak Khan wore a defeated expression as he surveyed the shanty homes of his neighborhood on the outskirts of Islamabad, his house marking the border between those still standing and others now reduced to rubble.

The 45-year-old fruit vendor and his family have lived in the slum since moving from the Swabi district of northwest Pakistan in the mid-1980s, but they are now among more than 15,000 people facing summary eviction. “I have no idea what to do, where to go,” he said, surrounded by his four teenage sons. “We are Pakistanis here but we have no rights,” he added, pulling out his ID card to drive the point home.

With no water supply, electricity or sewage, the 2,000 homes that formed the “Afghan Basti” slum in Islamabad have long stood in stark contrast to the rest of Pakistan’s green and largely pristine capital. Situated on the edge of the city, the neighborhood is now at the heart of a battle over housing rights for the poor versus a drive by city authorities to get rid of “illegal” settlements.

Activists say authorities have launched an ethnic-based smear campaign against residents to try to force them out, and dozens have been arrested for resisting the bulldozers—some of them charged under anti-terror laws.

“The Islamabad High Court has given us directions to remove all the illegal slums and we are carrying out operations across the city,” said Ramzan Sajid, a spokesman for the Capital Development Authority, over the rumbling of cranes, bulldozers and tractors.

To Islamabad’s bureaucrats and their many supporters among the city’s middle and upper classes, this slum and others like it are a haven for criminal gangs and supposed “Afghan” militants. Their very existence is seen a blot on the landscape of the capital and testimony to the lawlessness that is rampant in some parts of Pakistan, an under-developed country populated by some 200 million people.

But planning experts say they point to a wider crisis facing the country’s poor as land prices in Pakistani cities have skyrocketed, with family homes in parts of the capital now costing as much as in some cities of Western Europe.

Arif Hasan, widely considered Pakistan’s foremost urban planner, blamed much of the rise on speculation by developers, while urbanization, infrastructure expansion and a recent economic revival have also helped push up prices.

“Land is the new gold,” said Hasan, adding that at least 30 percent of Pakistan’s urban population can only afford to live in areas considered “slums” or “katchi abadis.”

“You cannot have a city like Islamabad without having a sizeable area for affordable low-income housing,” he said. “It is irresponsible at best and criminal at worst.”

Designed by Greek architect Constantinos Apostolou Doxiadis, Islamabad was founded in 1960 to house the country’s bureaucrats. Its wide boulevards and grid design set it apart from most South Asian cities, but also mean it offers little accommodation for the lower-classes who work as laborers or domestic servants for the well-to-do.

Political activist Aasim Sajjad Akhtar said the poor were being unfairly penalized for not having the wealth or power to influence officials and claimed authorities were running a smear campaign against slum residents, most ethnic Pashtuns who have escaped unrest in the northwest and tribal areas. “They chose to demonize and criminalize the residents, calling them crooks and terrorists. They use their Pashtun ethnicity to create the idea they are terror sympathizers.”

Authorities have rejected such accusations in the past.

Residents say they are law-abiding citizens who want to get on with their lives in peace. “I was born here, I grew up here. How can I see my house being demolished for no apparent reason today?” asked Nasir Khan, a 32-year-old who like many in the area makes a living as a fruit seller for a monthly income of about $100.

While it was largely ignored by the city’s authorities for decades, Afghan Basti was nevertheless a functioning community, with shops, mosques and even five schools funded by non-profit organizations. Many of the first to move to the slum in the mid-1980s had spent nearly three decades improving their houses, using solar panels to generate electricity and digging their own wells and sewage systems.

Most will now be left with nothing, however. Pakistan has laws guaranteeing resettlement or compensation for displaced residents of katchi abadis, but CDA spokesman Sajid said these did not apply as the land had already been sold. “There is no alternative plan or compensation plan. These people have no right to this land,” he said.

Residents told AFP they would have no option but to move to another unoccupied area of the city if forced from their houses.

Muhammad Abdullah, a 63-year-old laborer, said: “If they destroy our homes, we still need to live somewhere.”