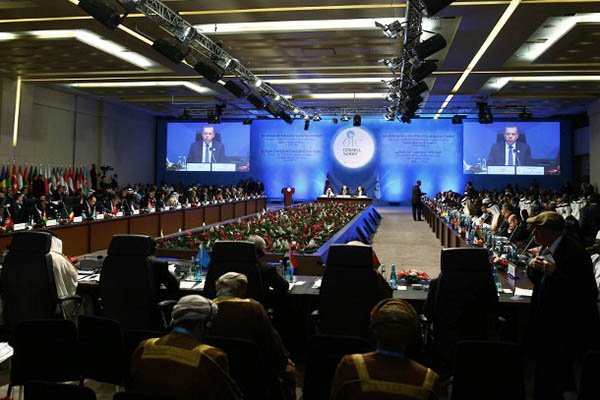 A major summit aimed at overcoming differences in the Muslim world condemned Iran on Friday for supporting terrorism and meddling in the affairs of other countries.

Iranian President Hassan Rouhani, who had been at the two-day Istanbul conference along with over 30 other heads of state and government from Islamic countries, did not attend the closing meeting in protest at the criticisms.

“The [Organization of Islamic Cooperation] Conference deplored Iran’s interference in the internal affairs of the States of the region and other Member States including Bahrain, Yemen, Syria, and Somalia, and its continued support for terrorism,” said the summit’s final statement. It also “condemned Hezbollah for conducting terrorist activities in Syria, Bahrain, Kuwait and Yemen and for supporting terrorist movements and groups undermining the security and stability of OIC Member States.”

The Arab League declared Iran’s ally Hezbollah a “terrorist” group in March after Gulf kingdoms did the same earlier in the month over the movement’s support for the Damascus regime in Syria’s war.

There was a security lockdown around the summit venue in Istanbul, the former capital of the Ottoman Empire from where Sultans for centuries ruled Muslims from the Balkans to Arabia. Turkey has been on high alert following attacks claimed by the Islamic State group and increased violence linked to the Kurdish conflict.

While the summit marked one of Istanbul’s most significant gatherings of heads of state for years, some high profile leaders like Jordan’s King Abdullah and Egyptian President Abdel Fattah al-Sisi were notable by their absence.

Turkey’s relations with Cairo have still not recovered from the 2013 ousting of Islamist president Mohamed Morsi, a close ally of Ankara, while ties with Amman are being tested by differences over Syria. Iran’s Rouhani is due to meet Turkish President Recep Tayyip Erdogan in Ankara on Saturday.