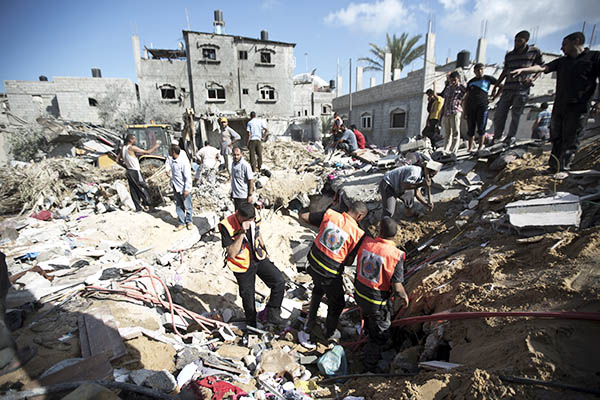 Israel announced it would be holding its fire in most of Gaza for seven hours on Monday, amid world outrage over a deadly strike on a U.N. school in the Palestinian territory.

The unilateral truce, four weeks into fighting with Gaza de facto rulers Hamas, came after world powers fiercely condemned the attack that left 10 Palestinians sheltering at a school dead, as Israel was pulling some of its troops from Gaza.

The Israeli army said the seven-hour “humanitarian window” would take place between 0700-1400 GMT in the entire Palestinian enclave except the area east of southern city Rafah, “where clashes were still ongoing and there was Israeli military presence.”

The army warned in a statement that it would “respond to any attempt to exploit this window” and attack civilians and soldiers during the truce, the sixth Israel has declared since the July 8 beginning of the confrontation. It also said that residents of Abasan al Kabira and Abasan al Saghira, two villages east of Khan Yunis in southern Gaza, could return home.

The announcement was received with distrust by the Islamist Hamas movement, whose spokesman Sami Abu Zuhri called on Gazans to proceed with caution. “The unilateral ceasefire announced by Israel is an attempt to divert the attention from Israeli massacres,” he said.

The Israeli army said that it had on Sunday targeted three Islamic Jihad militants on a motorbike “in vicinity of an UNRWA school in Rafah.”

U.N. Secretary General Ban Ki-moon called the attack on the school sheltering some 3,000 Palestinians who had fled their homes due to the fighting “a moral outrage and a criminal act.” U.S. State Department spokeswoman Jen Psaki said Washington was “appalled” by the attack and called for a “full and prompt” investigation. “Israel must do more to meet its own standards and avoid civilian casualties,” she said.

French President Francois Hollande said the bombing of the school was “unacceptable,” backing calls by Ban “to ask that those responsible for this violation of international law answer for their actions,” without saying who he considered responsible.

In an early Monday statement, Israeli Prime Minister Benjamin Netanyahu said “Israel does not aim its fire at civilians and is sorry for any attack that unintentionally hits civilians,” without directly addressing the attack on the school.

Israeli strikes on Gaza meanwhile continued early Monday, killing 11 people, including an Islamic Jihad commander, raising the death toll since the July 8 beginning of the confrontation to over 1,820 according to Palestinian medical sources.

The Israeli announcement on the truce came as the 28th day of the confrontation began, with international attempts to broker a diplomatic end to the fighting bearing no results.

Efforts were continuing with a Palestinian delegation in Cairo for talks with U.S. and Egyptian officials, after Israel’s security cabinet decided not to send a representative. The Palestinians, who met Sunday to hammer out a common position, want “a ceasefire; Israeli troop withdrawal from Gaza; the end of the siege of Gaza and opening of its border crossings,” said Maher al-Taher, a member of the delegation.

Two Israeli civilians and a Thai farm worker were killed by mortars and rockets fired at Israel by Gaza militants in the past four weeks, with 64 soldiers killed in clashes and shelling in and around Gaza.

In his Monday statement, Netanyahu said the Gaza operation “will continue until its goals are reached: a return of quiet and security for Israeli citizens for a long period, while significantly harming terror infrastructure.”

“After completing our actions against the terror tunnels aimed at a mass attack against Israeli civilians, the IDF [Israel Defense Forces] will deploy for further activity according to our security needs, until our goals are achieved,” he said, echoing a Saturday remark seen as being the harbinger of a unilateral Israeli withdrawal.

On Sunday, the army confirmed it had begun withdrawing some troops from Gaza. “We are removing some [forces],” said Lt. Col. Peter Lerner, adding troops were “extremely close” to completing a mission to destroy a network of tunnels. “We are redeploying within the Gaza Strip, taking out other positions,” he said, indicating that the military was “changing gear.”

Witnesses had on Saturday reported seeing troops leave Beit Lahiya and Al-Atatra in the north as well as from villages east of Khan Yunis in the south. On Sunday, AFP correspondents reported around 100 tanks gathering in the border area outside Gaza where they had not been before, having just pulled out, while others were seen driving away from the border.