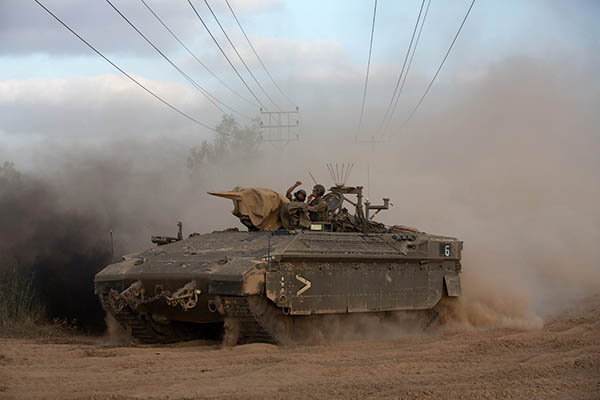 Approximately 2,250 Palestinians and several Israelis injured in the ongoing offensive.

The new peace push came as Israel’s campaign against the besieged Palestinian territory entered day 12 in the bloodiest conflict for several years, and the Jewish state stood poised to intensify a ground operation inside the Strip. U.S. President Barack Obama has supported Israel’s right to defend itself against Gaza rocket fire, but urged it to work harder to avoid innocent deaths in an operation with a high civilian toll, including many women and children.

In the face of Israel’s land, sea and air offensive, Islamist movement Hamas, which is the main power in Gaza, has remained defiant as Palestinian President Mahmud Abbas traveled to Egypt and Turkey for truce talks.

An early morning airstrike outside a mosque in the southern city of Khan Yunis killed seven people on Saturday, including a woman, emergency services spokesman Ashraf al-Qudra said. Other raids shortly afterwards killed another four, bringing the total death toll to 307 Palestinians and two Israelis. Some 2,250 Palestinians and several Israelis have been injured.

The U.N. said Friday Secretary General Ban Ki-moon would leave for the region Saturday in a bid to end the violence. Ban would help Israelis and Palestinians “in coordination with regional and international actors, end the violence and find a way forward,” under secretary general for political affairs Jeffrey Feltman told emergency talks at the Security Council.

But the two sides’ U.N. ambassadors traded blame for the violence, with Israel’s Ron Prosor insisting no other country would “tolerate … terrorist” rocket fire at its citizens. Palestinian ambassador Riyad Mansour read aloud the names of Palestinian dead, including women and children to the Security Council, and at one point appeared close to tears.

Israel’s ground incursion, launched on the tenth day of an operation to stamp out rocket fire from Gaza, has killed dozens and forced thousands of people to flee. Netanyahu said he had ordered the military to be ready for “a significant broadening of the ground activity.” He then convened his security cabinet to discuss a possible expansion of the campaign, which began on July 8 with the aim of stamping out cross-border rocket fire.

Israel’s armed forces chief of staff, Lt. Gen. Benny Gantz, said the army was “expanding the ground phase of the operation,” according to a statement. “There will be moments of hardship,” he warned in a briefing to the military, anticipating further Israeli casualties.

In Gaza, after a relative lull Friday, violence picked up again in the evening, with intensifying tank shelling and air strikes killing more than a dozen people. Among them were eight members of a single family, including four children, killed by tank fire on their home in northern Gaza, Qudra said.

The U.N. agency for Palestinian refugees UNRWA has opened 34 of its schools to shelter those fleeing. It said Friday there were 47,000 Gazans seeking sanctuary with the agency.

The World Food Program said it had already distributed emergency food rations and food vouchers to more than 20,000 displaced people. But with the ground operation, it was gearing up for a huge increase in the coming days and hoping to reach 85,000 people with food distributions, a spokeswoman said.

Gaza was also struggling with a 70 percent power outage after electricity lines from Israel were damaged, officials said.

Obama told reporters the U.S. supports Israel’s right to defend itself, but said Washington was “deeply concerned about the risks of further escalation and the loss of more innocent life.” He added that Washington was “hopeful” that Israel would operate “in a way that minimizes civilian casualties.”

Israel pulled out all of its troops and settlers from Gaza in 2005, but within a year it became the de facto seat of Hamas after it won a landslide victory in Palestinian parliamentary elections.

Meanwhile, Abbas was in Turkey where he urged support for an Egyptian-brokered ceasefire proposal. French Foreign Minister Laurent Fabius said Abbas had urged Paris to ask Hamas allies Qatar and Turkey to pressure the group into accepting a ceasefire. Hamas has rejected Egyptian proposals for a truce, demanding an easing of a harsh Gaza blockade imposed by Israel in 2006 and the release of Palestinian prisoners.