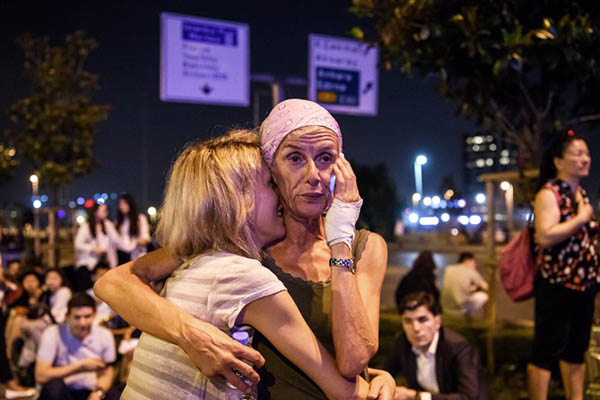 Survivors say they relied on social media, airport staff to help them endure the ordeal.

A petrified honeymoon couple hugged each other inside a hair salon cupboard as shots rang out outside, praying the gunmen rampaging through Istanbul’s airport would not find them. Other survivors crouched under check-in counters frantically weighing up whether to stay put or flee.

Amid the chaos, some watched the horror unfold on smartphones or told their stories live on social media. Many were left not knowing for hours whether loved ones were alive or dead.

Witnesses to the carnage at Istanbul airport described scenes of blind panic and stomach-churning terror after attackers detonated three bombs and began shooting indiscriminately in the main terminal building. At least 41 people died in the bloodiest of four attacks in the city this year. Turkish authorities have pointed the finger at Islamic State militants.

Security cameras captured passengers scattering desperately on Tuesday evening as a huge ball of flame erupted at one entrance. Other footage showed a black-clad gunman blowing himself up after apparently being floored by a police marksman’s shot.

Abandoned luggage sprinkled with shards of shattered glass was strewn across the blood-splattered floor. With passengers scrambling in every direction, some survivors were left with agonizing waits to discover if traveling companions had also got out.

Otfah Mohamed Abdullah was checking her luggage in when she saw one of the attackers pull out a hidden gun and begin shooting. “He’s shooting up, two times, and he’s beginning to shoot people like that, like he was walking like a prophet,” she told AFPTV. “… and then my sister was running I don’t know which way. She was running and after that I was falling down, I was on the ground until he finished. Until now I can’t find my sister and I don’t have anything, everything [I have] is inside.”

Japanese woman Yumi Koyi was waiting for her flight to Tokyo when the attacks began and she was swept up in a scramble to escape. “I heard gunshots so it was really panicking, everyone together.”

Latvian businessman Rihards Kalnins told AFP that those inside the terminal had no way of knowing what was happening. “There was just panic about what was going on. People were running, screaming. I didn’t know what was going on. At first I thought it was a fight or something like that. I had no idea. Then people started saying there was an explosion, there was gunfire. There was no order. Then for the next few hours, the only way to find out what was going on was through social media. Literally while we were hiding out a couple of hundred meters away around the corner, some local guy was showing us video footage on his phone of what was going on 200 meters away—which was surreal.”

New York-based Iraqi journalist Steven Nabil said he was on his way home from his honeymoon when he was caught up in the drama, which he depicted in a series of Tweets. He had left his wife in a cafe while he went to get food on a different floor. “Heard shots, ran fast toward her,” he wrote. “Came down the stairs to see the court empty and the terrorist firing toward us. We then took cover in a closet inside a hair salon. The 45 minutes we were sitting ducks waiting to find out who will open the door. When the bullets were close I hugged and kissed her.”

South African university administrator Judy Favish was checking in on her way home from Ireland. As others scattered, she opted to huddle under the counter along with ground staff.

“After about 10 minutes someone told us we had to move and we were ushered, running, down to the basement. A couple of people who had been injured were with us and they were still bleeding and very shaken,” she told eNCA television. “A couple of people had major panic attacks downstairs. We were there for about two hours and then they said we could go and ushered us out. We walked through the airport and saw debris and blood. It was just chaos. It was horrible.”