Istanbul on Edge After Suicide Attack 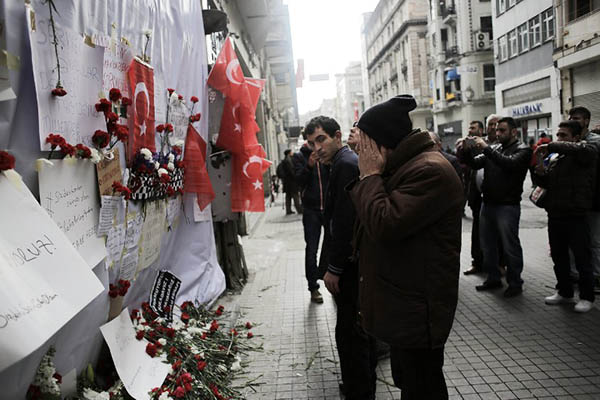 Blamed on the Islamic State, the explosion left four people dead and 19 others injured.

Turkey on Sunday named the bomber behind a suicide attack in a busy Istanbul shopping and entertainment hub that killed four foreigners as a Turkish jihadist with links to the Islamic State group.

The attack on the famous Istiklal Caddesi street sent shockwaves through the city, where a derby between rivals Galatasaray and Fenerbahce was postponed Sunday after the authorities received information of what they called a “serious” threat.

Interior Minister Efken Ala identified the alleged perpetrator of the attack as Mehmet Ozturk from Gaziantep, on the border with Syria. “The attacker has been formally identified. He is linked to the terrorist organization Daesh [Islamic State],” Ala said.

Ozturk, who was born in 1992 and travelled to Syria between 2013 and 2015, had been sought by police over his alleged links to an I.S. cell in Turkey, Hurriyet newspaper reported.

Ala insisted however he was “not on our [police] wanted list,” defending the government against accusations of repeated security failings following six bombings since July that have killed over 200 people.

On Saturday, three Israelis and one Iranian were killed when the bomber detonated his explosives. The bodies of the three Israelis were flown home Sunday for burial. Most of those injured in the blast were foreigners.

Nineteen people were still being treated in hospital Sunday, eight of them in critical condition, the health ministry said.

The interior minister said five people had been arrested on suspicion of links to the attack. Dogan agency reported that Ozturk’s father and brother were among those held.

The normally bustling district targeted by the bomber was eerily silent Sunday, with many people skirting the neighborhood for fear of further bloodshed. In a sign of the nervousness, a highly anticipated game between Turkish premier division sides Galatasaray and Fenerbahce was postponed two hours before kickoff over a security threat.

Spectators had already started arriving for the game at Galatasaray’s Turk Telecom Arena when the decision was announced and they were asked to leave the ground.

President Recep Tayyip Erdogan attempted to rally the public, telling Turks to not give into the “fear and despondency.”

“Turkey will never give into terrorists’ agenda,” he declared, sending his condolences to the victims’ families.

The Istanbul blast came just six days after 35 people were killed in a suicide car bombing in a busy square in the capital Ankara, in an attack claimed by Kurdish rebels. Israeli media said the three Israeli victims were part of a group that was on a gastronomic tour of Turkey. Two of them also had U.S. citizenship.

On Sunday, Israel’s anti-terrorism office warned against travel to Turkey, citing “the threat to tourist targets” throughout the country.

The main opposition newspaper Cumhuriyet said the latest strike was proof of the government’s “incompetence” in security matters.

Ankara had borne the brunt of the attacks until now, being hit three times in the past five months. I.S. was held responsible for Turkey’s worst ever attack, which killed 103 people at an October peace rally in Ankara.

The last such bombing in Istanbul, which was also blamed on I.S., targeted the tourist quarter of Sultanahmet, where the Blue Mosque is located. Twelve German tourists were killed in that blast.

Flowers, candles, Turkish flags and placards—one reading “We are not afraid”—were left at the spot where the bomber struck outside a local government building. Despite the messages of defiance, many people expressed fears for their safety.

“You never know where it can happen. It’s terrifying,” said Ismail, a chef from a local restaurant.

The U.S. and Europe, NATO allies that have been critical of Turkey’s slide into authoritarianism under Erdogan, both rushed to assure the country of their support in the wake of the attack.

Erdogan has been accused of trampling free speech and of neglecting the fight against I.S. to wage war against the outlawed Kurdistan Workers Party after a two-year truce between the state and the rebels fell apart in July. A radical Workers Party offshoot, the Kurdistan Freedom Falcons, claimed responsibility for the March 13 suicide car bombing in Ankara, saying it was to avenge civilians killed in a military offensive in the mainly Kurdish southeast. The same group also claimed a February attack targeting troops in Ankara that killed 29 people.