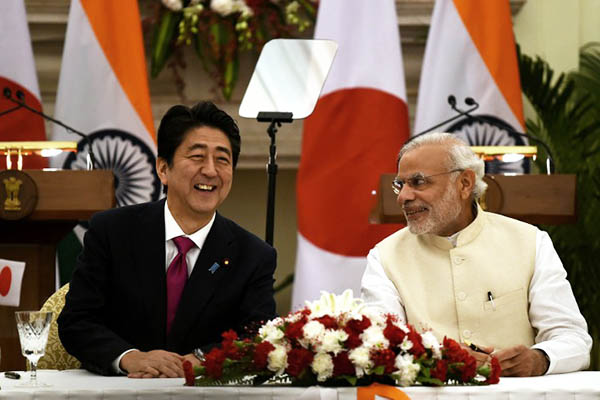 Deals also inked on defense technology, according to P.M. Modi.

“This enterprise will launch a revolution in Indian railways and speed up India’s journey into the future,” Modi said of plans for a Japanese-made bullet train to link the cities of Mumbai and Ahmedabad. “It will become an engine of economic transformation in India,” he said.

Modi and Japanese Prime Minister Shinzo Abe also agreed a long-mooted memorandum of understanding on the peaceful use of nuclear energy, which has not yet been signed as technical details are still being finalized, a spokesman for India’s foreign ministry said on Twitter.

Japan once shunned nuclear cooperation with India, which has not ratified the international nuclear Non-Proliferation Treaty, but analysts say Tokyo has since softened its stance. Modi and Abe, both right-wing nationalists, have forged an unusually close relationship since the Indian leader came to power last year, in part to counter China’s growing influence.

The Indian P.M. has pledged to overhaul India’s ramshackle railways and other infrastructure as part of his ambitious economic reforms.