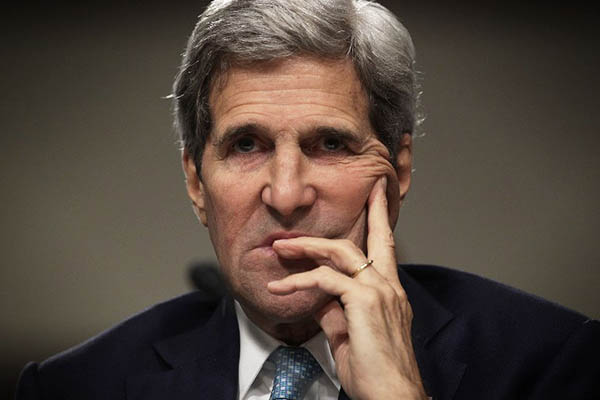 U.S. Senate Committee on Foreign Relations accuses secretary of state of being ‘fleeced’ by Tehran.

U.S. Secretary of State John Kerry faced blistering accusations on Thursday that he had been “fleeced” and “bamboozled” by Tehran, as he defended the Iran nuclear deal publicly for the first time on Capitol Hill.

Kerry appeared before the Senate Committee on Foreign Relations to defend the hard-fought agreement, which he called a “good deal for the world” that deserves the approval of a skeptical Congress. “The truth is that the Vienna plan will provide a stronger, more comprehensive, more lasting means of limiting Iran’s nuclear program than any alternative that has been spoken of,” he said of the deal struck last week in the Austrian capital. Once in place, it would put Iran under “intense scrutiny forever” and keep the world united in ensuring that its nuclear activities “remain wholly peaceful,” he added.

But Kerry, peering wearily over a pair of wire-rim glasses, encountered a tsunami of skepticism from Republicans on the Senate Foreign Relations Committee, during a marathon four-and-a-half-hour hearing. “I believe you’ve been fleeced,” said committee chairman Bob Corker, arguing that the Vienna deal would give Iran “a perfectly aligned pathway” toward becoming a nuclear power in due time. “With all due respect, you guys have been bamboozled and the American people are going to pay for that,” echoed fellow Republican senator James Risch. “Anybody who believes this is a good deal really joins the ranks of the most naive people on the face of the Earth,” Risch said.

Kerry was testifying publicly on Capitol Hill for the first time since the U.N. Security Council on Monday unanimously endorsed the Iran agreement, paving the way to the lifting of punishing economic sanctions. The deal was reached after tough negotiations between Iran and the Security Council’s five permanent members—Britain, China, France, Russia and the United States—plus Germany. But it faces stiff resistance, notably among Republicans in the Senate and the House of Representatives, which have 60 days to review it.

Congress can pass a motion of disapproval, but President Barack Obama can then veto that. An override of the veto would require two-thirds approval in both the House and Senate.

Kerry was welcomed to the committee chamber by about a half-dozen Code Pink anti-nuclear activists sporting bright pink “Peace with Iran” T-shirts. “Awesome job!” one of them shouted.

But Kerry was visibly irked several times by the aggressive line of questioning from Republican senators, a day after he held closed-door briefings to explain the deal to them. Every member of the Foreign Relations Committee was present Thursday, including its two Republican presidential hopefuls—Rand Paul and Marco Rubio.

“This deal is your deal with Iran,” said Rubio, arguing that it does nothing to address human rights violations in the Islamic republic. “The next president is under no legal or moral obligation to live up to it… The deal can go away when President Obama leaves office,” he added.

Paul questioned Iranian compliance, saying Tehran is shadowed by “a history of untrustworthiness.”

Other senators’ concerns ranged from Israeli security to the lifting of the Iranian arms embargo and why the Obama administration put the deal before the United Nations without consulting Congress first.

Predictably, Democratic senators leaned in favor of the agreement, but made it clear that they expected Iran to live up to its letter and spirit. “If you don’t live up to this agreement, I guarantee you, the consequences will not be pretty,” Senator Barbara Boxer said.

Kerry replied with a blunt “yes” when fellow Democrat Tim Kaine asked whether approval of the deal would make it easier for the United States to rally international support for military action against Iran, should Tehran fail to keep its promises.

Public opinion polls have suggested that of the 79 percent of Americans surveyed who heard about the Vienna deal, 48 percent disapprove.

On Wednesday, several thousand protesters poured into New York’s Times Square to denounce the Iran nuclear deal as a threat to Israel and global security, and demanded that Congress reject it.