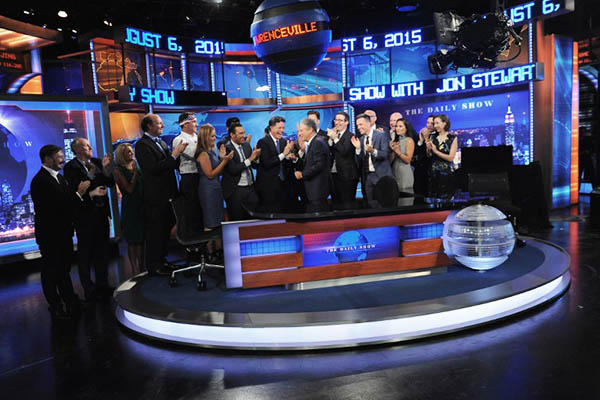 Satirist and comedian caps off his tenure with a star-studded final show.

American satirist Jon Stewart ended 16 years as host of The Daily Show with a standing ovation punctuated with a song tribute by rock legend Bruce Springsteen, bringing to close a unique era in U.S. broadcasting.

As the hashtag #JonVoyage trended on Twitter, an emotional Stewart made his last appearance on the Comedy Central show, thanking colleagues, fans and family and delivering a final monologue. The 52-year-old had turned the four-times a week show into a unique blend of politics, journalism and entertainment that skewered politicians, the world in general and sensationalist cable news coverage in particular.

Loved by liberals as a voice of reason, distrusted by conservatives for his left-of-center perspective, the clever, biting and funny Stewart indicated that he would be back—if only in another guise. “Nothing ends. It’s just a continuation. It’s a pause in the conversation. So rather than saying goodbye or good night, I’m just going to say I’m gonna go get a drink,” he said.

Since 1999 he has been a liberal conscience, from the end of the Clinton presidency and the arrival of George W. Bush, through the 9/11 attacks to the wars in Iraq and Afghanistan and the financial crisis. “Bullshit is everywhere. There’s very little that you’ll encounter in life that has not been infused in some way with bullshit,” said Stewart in his final monologue. “The best defense against bullshit is vigilance so if you can smell something, say something.”

Trevor Noah, the South African comic who will replace Stewart in September, cheekily appeared to measure up the set and… Stewart’s crotch. But few fans believe Trevor can fill Stewart’s enormous shoes.

Many were already missing Stewart’s wit as Thursday’s Republican debate ended moments after the final, pre-taped show went on air. “It just feels like this is going to be a tremendous void and it’s hard to see how it can be filled,” said Chris Reilly, a homemaker from Connecticut in the queue to attend the show for a fourth time.

Besides taking politicians and TV networks to task—CNN and Fox News in particular—Stewart’s show had a guest list second to none. President Barack Obama has shared the screen with Stewart seven times, most recently last month, when he joked he would ban Stewart from leaving.

The White House blog paid tribute to “one of the most influential programs on television” that “changed the way we talk about the world around us.”

Winning almost two dozen Emmy awards, Stewart also cultivated and nurtured new talent, helping to launch the careers of comedians who are now stars in their own right, such as Stephen Colbert and John Oliver.

Stewart paid tribute to them in his final show. He offered viewers a behind-the-scenes tour of the show’s rather cramped premises in the Hell’s Kitchen district of Manhattan, and videoed introductions to seemingly all the backstage staff.

But the highlight was the closing set from Springsteen, a fellow New Jersey native, who blasted out renditions of his hit tracks “Land of Hope and Dreams” and “Born to Run.”

Watched by a modest TV audience of 1.3 million a day, The Daily Show reached several million more online, in particular younger viewers.  But according to the Pew Research Center, less than one percent of conservatives said they trusted the show, while nearly half of liberals—45 percent—do.

It was in times of crisis that those Americans looked to Stewart as a rock. After the September 11, 2001 attacks, he was there fighting back tears. In June, after the racially motivated murders of black worshippers at a church in Charleston, he delivered a searing monologue about America’s “gaping racial wound that will not heal, yet we pretend doesn’t exist.”

Comedy legend Jerry Seinfeld was one of those to pay their respects. “Wish you all best, dude,” he wrote on twitter. “Love you, man.”