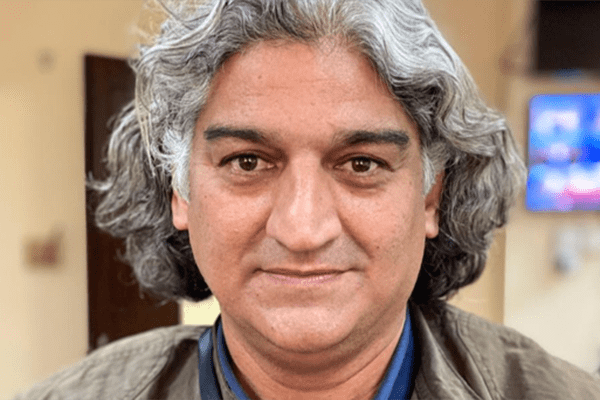 Senior journalist Matiullah Jan’s family on Tuesday reported that he had been abducted by “unidentified men,” prompting outcry of concern and anger from human rights organizations.

In an interview with The Independent, Jan’s wife said that his car had been located outside the school she worked at in Islamabad’s G-6 area. She said the keys were still inside, indicating that he had been taken against his will. “I have been told that some people forcibly took away my husband,” she added.

CCTV footage of the abduction, seen by Newsweek, shows a convoy of cars, including a land cruiser with red and blue emergency lighting. A large number of men can be seen disembarking from the vehicles and forcing Jan into one of their cars. The footage also shows Jan hurling his mobile phone into the building, and a uniformed individual—it is unclear of which security force—demanding that it be handed to them.

In a posting on Twitter, the Human Rights Commission of Pakistan (HRCP) demanded the government “immediately ensure the safe recovery of journalist Matiullah Jan, whose family confirms that he has gone missing.”

Islamabad police have said they have started an investigation into the matter, clarifying that they had no role in Jan’s disappearance. Senator Mustafa Nawaz Khokhar, the chairman of the Senate Standing Committee on Human Rights, said in a posting on Twitter that it had summoned the inspector general of Islamabad police on Wednesday (July 22) “as a matter of grave urgency and unquestionable importance” to brief it on the “abduction/disappearance” of the journalist.

Amnesty International also posted its concerns about Jan on Twitter. “We are extremely concerned for the fate and wellbeing of Matiullah Jan He has been the subject of physical attacks and harassment for his journalism. The authorities must establish his whereabouts immediately,” it said.

The journalist was this week summoned to the Supreme Court in a contempt of court case over a tweet allegedly against the judiciary.