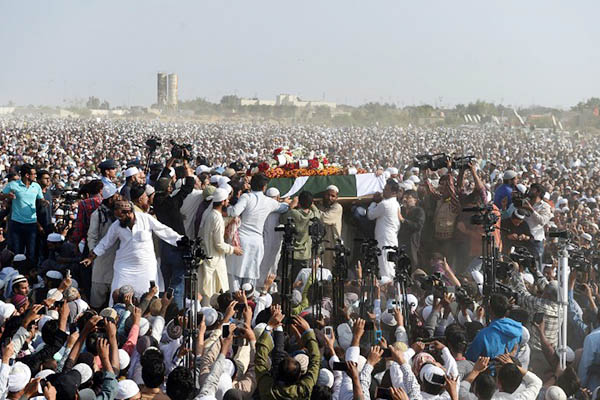 Huge turnout at singer’s funeral after plane crash that also left 46 others dead.

Thousands attended the funeral prayers on Thursday of Junaid Jamshed, a pioneer of Pakistani pop who renounced music to become a Muslim evangelist and who was among 47 people killed in a plane crash last week.

Politicians, senior military officers, cricketers, singers and fans were among those who bade farewell at a service held at a cricket ground in Karachi. “I cannot believe that Junaid is no longer with us,” said Maulana Tariq Jamil, a renowned Islamic preacher, who led the funeral prayer.

Born in Karachi in 1964, Jamshed shot to fame in the late 1980s as lead singer of the boy band Vital Signs, where his dashing looks and brooding vocals made him a style icon and heart-throb for a generation emerging from the harsh Islamist rule of military dictator Zia-ul-Haq.

Many of his biggest fans turned to critics however, when in the early 2000s Jamshed left his career in pop to become a member of the Tableeghi Jamaaat, a Sunni evangelical group that preaches its austere brand of Islam throughout the world.

Jamshed’s funeral was held more than a week after his death as the family awaited a DNA report to verify his remains. His body was buried at the graveyard of Darul Ulom Korangi, a prestigious Islamic seminary.

Pakistan International Airlines flight 661 smashed into a hillside in the country’s north while traveling from Chitral to Islamabad last Wednesday. The airline has said one of the plane’s two turboprop engines failed. It was the fourth deadliest air crash on Pakistani soil.