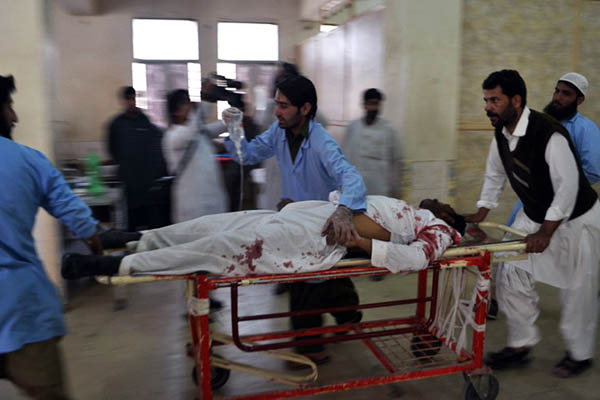 Paramedics rush to hospital one of the victims of Thursday’s blast. Banaras Khan—AFP

Militant group claims it targeted Maulana Fazlur Rehman for speaking against it, and will continue trying to assassinate him.

A militant group on Friday claimed responsibility for a suicide bombing targeting the head of the Jamiat Ulema-e-Islam Fazl political party.

Maulana Fazlur Rehman, chief of the JUIF party, escaped unscathed from the blast after addressing a rally in Quetta on Thursday. One person was killed and more than 17 injured in the explosion that happened near Rehman’s bulletproof car.

The Jundullah militant group claimed responsibility in a telephone call to AFP from an undisclosed location and vowed to target Rehman again. “We very proudly claim responsibility for the suicide attack on Maulana Fazlur Rehman and we will do it again,” said Ahmed Marwat, the group’s spokesman. “He has been speaking against us and done some actions against us for which he was targeted.”

Jundullah, active in North Waziristan, claims to have links with the Tehreek-e-Taliban Pakistan (TTP) and has claimed several attacks in the past.

Rehman and his party have been targeted by the Pakistani Taliban in the past, even though he once acted as a negotiator between the militants and the government during peace talks that broke down earlier this year.

A bombing at a JUIF election rally in May 2013 killed more than 20 people, while Rehman was targeted twice in as many days by bombings in 2011.

Officials said Thursday’s attacks could have been in response to the ongoing military operation against militant groups in North Waziristan.

Separately police said that they had rounded up some 20 suspects in connection with a sectarian attack and bombing of a paramilitary convoy which also occurred on Thursday, killing 10.

The sectarian attack came just days before the start of the Islamic month of Muharram, considered particularly holy for Shia Muslims.

The month has frequently been marred by violence in recent years. Clashes between Sunnis and Shias led to at least 11 deaths in Rawalpindi last November.