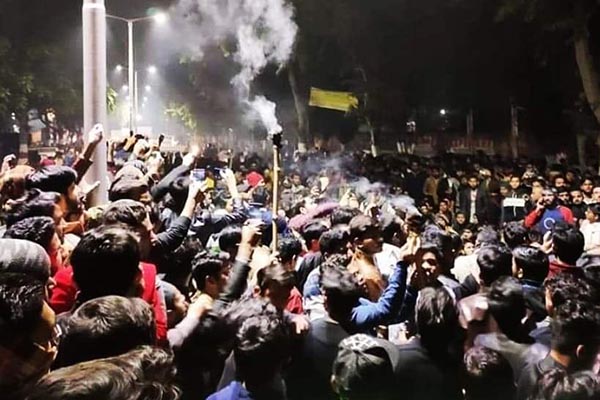 Delhi’s turn to a state operating under Hindutva ideology has erased the old order of ‘secular’ India vs. ‘ideological’ Pakistan

Democracy is no panacea if it curtails liberty, maltreats minorities with the assent of the majority, and punishes free-thinking on the yardstick of nationalism. Unfortunately, this is all playing out in India right now, propelling the country toward a new phase that might well prove a turning point in its history of democratic rule.

As summed up by The Economist in its Nov. 28, 2020 issue: “By leaning on the big conglomerates that dominate the mainstream media, by favoring outlets that share its ideology, such as Goswami’s, and by flooding social media with agitprop, the BJP has largely marginalized critical voices in the press. In the past two months, new rules have curtailed the permitted level of foreign investment in online media and placed the entire sector under the authority of the broadcasting ministry. The moves appear to be aimed at getting a grip on one of the main remaining outlets for dissent, say editors at three of India’s increasingly popular news sites. One that specialized in hard-hitting investigative stories, HuffPost India, closed on Nov. 24.”

India has traditionally enjoyed a regional advantage vis-à-vis Pakistan, but has in recent years fallen prey to domestic concerns, largely because of its Hindutva transformation—which the outside world has yet to give a damn about. The ruling Bharatiya Janata Party (BJP) is currently seeing the first major protest to its ideology and economic management, as thousands of farmers take to the streets against government policies. In September, Prime Minister Narendra Modi announced he would “liberate” farmers of Punjab-Haryana from “state interference through pricing” by ending the purchase of their crops. Result: protesting farmers who claim they “fear big corporations” are converging on capital New Delhi, where minorities protesting Hindutva rule have also been demanding their due rights.

But Hindutva imagination has already penetrated the whole of India as an ideology—a development the outside world finds concerning but still considers an “internal issue”—erasing the old order of an “ideological” Pakistan versus a “secular” India. Instead of the two states finding common ground under the banner of “ideology,” India’s adoption of Golwalkar’s views—who believed “it was important to transform India into a racially pure Hindu nation with uniform Hindu culture and language”—has only caused more fractures. Hindutva founder Golwalkar didn’t realize that two “religious” neighbors might still find cause to battle each other, as one (Pakistan) has little reason to feel its own ideology challenged while Muslims in India continue to suffer.

One thought that India and Pakistan would undergo a “meeting of the minds” after Delhi completed the process that Pakistani poetess Fahmida Riaz had forecast in a stanza addressed to India: “tum tau bulkul hum jaisay niklay” (you turned out to be just like us). But if anyone thought that going to India would offer protection from the extremes of Pakistan’s ideology, they would be wrong. Today, if you aren’t Hindu, you would be unhappy in India, just as a non-Muslim would be unhappy in Pakistan. (One must distinguish, however, between Pakistan’s “constitutional” ideology and India’s “legislative” ideology that has yet to be merged into a “revised” constitution.)

Pakistan thinks it has found the true path (one nation, one language, one religion) but is shaken by the one found by India (Hindi, Hindu, and Hindustan) that aims to “denationalize” its non-Hindus (primarily Muslims). But most Hindus of India love it just as Pakistani Muslims love their sharia. Modi is popular because of the BJP’s Hindutva views, which distinguishes it from Pakistani parties in power, who routinely defeat clerical parties pledging a stricter utopia through ideological revolution. One reason the two countries can’t become friends “through ideology” is in fact Pakistan’s reluctance to impose sharia in full and India’s fuller embrace of Hindutva.

The Citizenship Amendment Act 2019, by inserting religion as a criterion for citizenship undermines the secular nature of the Indian state; a tamed judiciary, inclined to accept Hindutva, has largely ignored the 140 legal petitions that have been raised against it. On the street, as BJP “youth” attack Muslims and the police simply look on, the world might express anguish, but the “legal” Indian citizens tend to be apathetic. “Love jihad”—the Hindutva term for Muslim men marrying Hindu women—is slowly being accepted by courts as a valid reason to undo interfaith marriages. The Economist adds: “Of the ostensibly independent institutions that are now compliant, India’s police stand out. Despite individually humane and honest officers, the impression Indians hold of the force is that its main purpose is to protect the powerful and persecute the weak. A case in point is the Delhi police’s management of communal riots that racked parts of India’s capital for three days last winter, leaving 53 dead.”

An amendment made to the Unlawful Activities Prevention Act of 1967 bans certain groups as terrorists and enables the government to designate any individual as a terrorist. The state is empowered to “hold suspects indefinitely with no right of bail, confiscate their property and implicate any associate as an accessory to terrorism.” This is what empowers the “real ruler,” Interior Minister Amit Shah, who surveys with satisfaction the growing curtailment of academic freedom in India. One report stated: “This pattern has the potential to shrink the space for academic inquiry and impede the development of a national higher education sector that benefits and is inclusive of all members of Indian society.”

Annexation of parts of Jammu and Kashmir occupied by India has not bothered the world, except for Pakistan. The message was: Pakistan can’t be benefited because of the “non-state actors” it imposed on India. Yet, the breach of human rights by Indian troops in the Valley can’t be ignored for long. And India is getting a bad image in the international media. It is just that, when it comes to Pakistan, the world is still chary of leaning too much in favor of Prime Minister Imran Khan and his “state of Madina.” Pakistan’s self-isolationist ideology, it seems, it still more acceptable than India, despite the latter’s abuse of Muslims of Kashmir.

The world increasingly doesn’t like what India is doing to itself: especially the fear that Indian media is subjected to, which translates into TV channels coming out in favor of the “big change.” But the world has to balance it with the non-state actor jihad towards India’s west in Pakistan and the 1979 background of military overthrow in Bangladesh. India’s “China problem” wins it ill-concealed support in America—Trump or no Trump—and enables it to pursue a Kautilyan strategy in the region: keep neighbors under pressure and reach out to states beyond the neighbors.

Pakistan clearly thought it could patch up with Hindutva-seeking Modi but found that the latter already had plans to unilaterally change the status of Kashmir. Had the BJP not already decided to “teach a lesson” to the Muslims in held Kashmir, the two states could agree to trade and gas routes across Pakistani territory, both going in India’s favor. Now, Pakistan fears what India would do to it from the western border. India’s Gulf policy has been more successful than Pakistan’s; it befriended the Arabs—to mutual satisfaction—and got close to Iran, which Pakistan couldn’t do because of its perceived “anti-Shia ideology.” Pakistan has also been less flexible than India with regard to Israel, and this principled position has caused further disadvantage as more Gulf nations recognize Israel.

India is failing internally—clearly seen only by its intellectuals. The outside world is “pragmatic” about a breach of human rights under Hindutva in India. The non-Hindu population is too big for India to ignore its unhappiness, which is complicated by the non-Hindi-speaking populations of India’s south and east. The world may not be willing to pressure India but is worried by South Asia’s ability to fight “nuclearized” wars. This aspect of the Kautilyan paradigm with regard to Pakistan and China—the latter also being India’s largest trading partner—might yet stay the hand of Hindutva ideology.