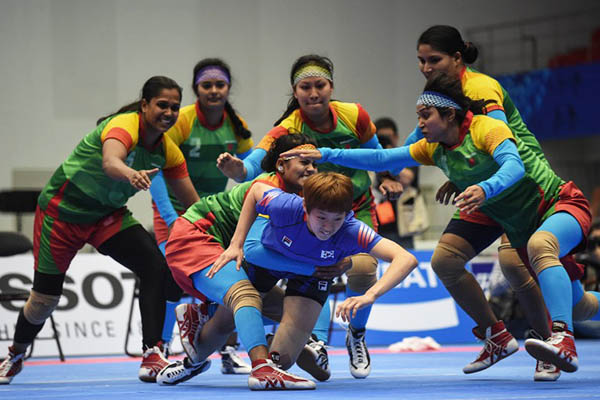 India remains global leader of the sport, as countries across Asia race to catch up.

Despite being a contact sport said to date back 5,000 years and rooted in Indian mythology, kabaddi is proving a knockout at the Asian Games as its popularity spreads.

Fans in South Korea enthusiastically turned out to watch the game, which requires yoga-like breathing skills as two seven-player teams send a raider into their enemy’s half of the court to tag an opponent before returning to safety—in just one breath.

Attackers chant “kabaddi, kabaddi” to prove they are not inhaling, the top players capable of doing it for several minutes. But India coach Balwan Singh, whose team rule the roost on the world stage, told AFP that kabaddi could be a perilous business.

“Everyone loves kabaddi—it is more popular than cricket,” he claimed in an interview. “Its very thrilling, very exciting. In India, everyone stops to watch kabaddi—children and old people. But it’s also dangerous. You can break bones very easily.”

The epic poem Mahabharata tells of a doomed raid on an enemy camp by the heir of the Pandava kings, while legend has it that Indian princes played the game as a courting ritual to show off their strength and win their brides.

Originating in rural India, the country has captured all six men’s Asian Games gold medals in kabaddi since it first appeared in 1990, including double gold in Guangzhou four years ago when the ladies made their debut. But other teams, including Pakistan and Bangladesh, are slowly catching up.

“Pakistan and Bangladesh are stronger but we just get stronger too,” said Singh. “There is no enjoyment without competition. It’s a tough sport and you have to be brave. It is man-to-man combat.”

Kabaddi, which was demonstrated at the 1936 Berlin Olympics, is also used by British army troops as a technique to keep fit. “It makes your stomach strong, your kidneys, heart, breathing,” said Singh. “You get more oxygen into your lungs. It’s a combination of wrestling, judo, boxing, rugby, athletics.”

While a Western kabaddi invasion is unlikely anytime soon, a recent professional league attracted 435 million television viewers in India.  More than 80 million were glued to their screens for August’s championship game, more than the figures for the World Cup or Wimbledon finals.

As their raiders entered enemy territory during a 30-15 mugging of Bangladesh, bobbing from side to side like a boxer looking for the right moment to strike, his teammates stood around sharing a joke.

It is not for the faint-hearted, however. When they catch a raider, they pounce, cobra-like, and gleefully pile on him as if in a school playground. “Kabaddi is in the Indian DNA,” said Malaysia team manager Engaittaraman Padmanathan. “India has two sports—cricket and kabaddi. In Malaysia everyone plays football. It is a developing sport in Malaysia. We used to play it in the evenings—30, 40, 50 years ago.”

“We have targeted fourth place at this Asian Games,” he added. “But we would like the silver in Jakarta in 2018.”

Kabaddi has already reached East Asia with Japan and home nation South Korea entering teams in the Asian Games. “I first tried kabaddi four years ago and something just clicked,” South Korean women’s captain Jo Hyu-Na told AFP. “I’ve seen people break bones and get knocked out. I love it. At the last Asian Games we just put a team in with about two months of preparation but we want a silver medal this time. I think we have opportunities.”