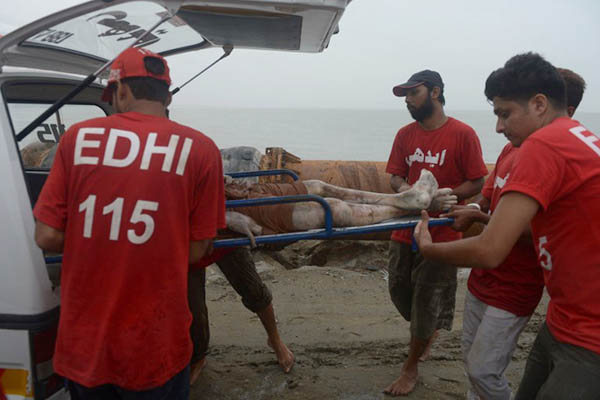 Residents of Karachi have been banned from swimming in the sea for six months, authorities said on Wednesday, after a recent surge in drowning cases as people seek relief from the scorching heat.

Rescue workers and media have reported some 15 cases of drowning at beaches along the city’s Arabian Sea coast over the past week, including eight on Tuesday alone, alarming authorities as summer intensifies. “The six month ban has been imposed on swimming, wading or diving in the sea to ensure the safety of public,” a government statement said.

Karachi’s beaches are popular with its population of roughly 25 million people, many of whom suffer from power outages and water shortages in the sweltering summers. The city is a sprawling metropolis with few green areas and, while it often enjoys cooling sea breezes, has scant facilities for coping with intensely hot weather.

In 2015, more than 1,200 people died as June temperatures reached 45 degrees Celsius. But safety standards on the beaches are low, with the few lifeguards on duty often unable to exert any authority.

“In absence of any effective guards at the beach, it is in the interest of the people to stay away from the beaches to prevent any untoward incident,” said Anwer Kazmi, a spokesman for the Edhi Foundation, the ambulance service that takes responsibility for the bodies of drowning victims.

Dozens of people drowned off the Karachi’s shore in 2014 after defying a ban on swimming during the monsoon season, which comes later in the summer, bringing with it rougher seas. The bathers were among thousands who had taken to the beaches to celebrate the Eid-ul-Fitr holiday marking the end of the holy fasting month of Ramzan.

This year the swimming ban comes just days ahead of Ramzan, during which millions of devout Pakistanis abstain from food and drink from sunrise to sunset, compounding the health risks Karachi’s residents already face in the heat.