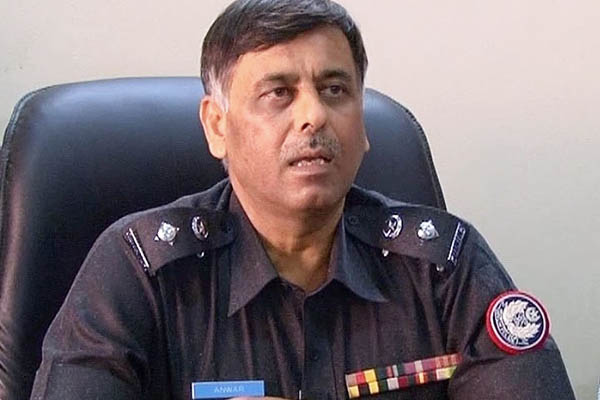 Militants on Saturday launched an unsuccessful gun and grenade attack on the top counter-terrorism official in Karachi, officials said, leaving five of the attackers dead.

Rao Anwar was on the way to offer his condolences after the death of another police officer shot by militants on Friday when his armored vehicle was set upon by 10 men, senior police official Najeeb Khan told reporters.

“Rao Anwar and other policemen remained unharmed in the attack as security detail responded swiftly and fired back at the militants and killed five of them,” Khan said.

Anwar corroborated the death toll and said he suspected that the militants belonged to the umbrella militant group Tehreek-e-Taliban Pakistan (TTP), which is active in Karachi and northwestern Pakistan. “Fortunately just a single grenade exploded,” he said, adding that three were thrown at his car.

The top policeman was suspended two days earlier for addressing a press conference in which he claimed two militants arrested on April 29 were members of Karachi’s Muttahida Qaumi Movement (MQM) political party, and were trained by an Indian intelligence agency.

Some of those who have lost their lives in encounters with security forces on Karachi’s streets are believed to have been suspected of involvement in the party’s armed wing, or to have links with the Taliban or Al Qaeda.

As the top counter-terrorism police officer in Karachi, dozens of TTP militants have been killed in operations under his command in the past few months, according to local officials. Anwar was also attacked by a suicide bomber in April 2012 while traveling home from his office. Four of his security personnel were killed in that incident.