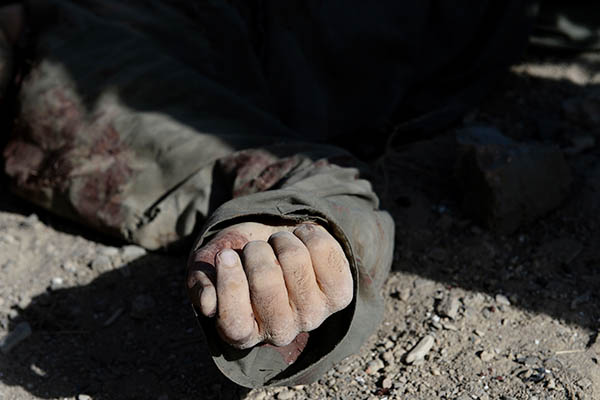 The NATO-led International Security Assistance Force (ISAF) denied that civilians had been killed, saying 10 militants had died in the airstrike in Kunar province, in the east of the country. But a statement from the president’s office said that according to provincial Governor Shujaul Mulk Jalala a vehicle “was targeted by a NATO airstrike that killed 16 civilians including women and children.”

“Hamid Karzai considers attacking women and children against all accepted international norms and strongly condemns it,” the statement said.

Civilian casualties in NATO operations have long been a source of friction between the Afghan government and U.S.-led NATO troops, who are winding down operations as they prepare to withdraw by the end of next year.

In February, Karzai ordered a ban on Afghan forces calling for NATO air support in the country after an airstrike killed 10 civilians in Kunar.

Saturday’s airstrike hit a pickup truck carrying women and children and killing all on board, according to Kunar Police chief Abdul Habib Sayedkhil. “At least four women, four children and two civilian drivers were killed,” he said.

ISAF said it was aware of the allegations and was looking into the incident.

“We can confirm Coalition Forces’ conducted a precision strike yesterday … resulting in 10 enemy forces killed,” it said in a statement. “At this time, we have no reports of any civilian casualties in regards to this incident.”

Ziarat Gul, a resident of Wattapur district where the attack occurred, described the strike as “brutal.”

“They should not have attacked the truck because of three or four insurgents, the lives of the civilians were more important and precious.”

Kunar, which borders Pakistan, is a stronghold of the Taliban-led insurgency and is also known to have a strong presence of foreign fighters.

The first attacker was killed when he smashed his explosives-laden vehicle into the gate of the bureau, opening the way for the other five to enter the building, he said. “Five attackers and four intelligence officers were killed in the ensuing clash. Thirty civilians were wounded,” he said. Fighting lasted an hour and only ended when all the militants were dead, he added.

An AFP reporter said he had seen the bodies of five militants at the scene.

“One hundred and fifty-three people including 23 women and two children have been brought to the hospital,” he said, adding that 12 civilians were in a critical condition.

The Taliban on their website claimed responsibility for the attack, saying their fighters had inflicted heavy casualties on the Afghan security forces.

Tens of thousands of civilians have been killed in Afghanistan since the Taliban launched their insurgency in 2001 after being ousted in a U.S.-led invasion.

As NATO troops wind down operations and Afghan security forces take charge of security responsibility countrywide, violence has been on the increase.

More than 1,000 civilians were killed and around 2,000 others were injured in the first half of 2013, according to a U.N. report, a 23 percent increase from the same period last year.

Peace efforts to contain the insurgency have so far failed to yield results.

In a bid to help peace efforts, Pakistan on Saturday announced the release of seven senior Afghan Taliban figures after Afghan President Hamid Karzai urged Islamabad to help arrange talks between his government and the Taliban.