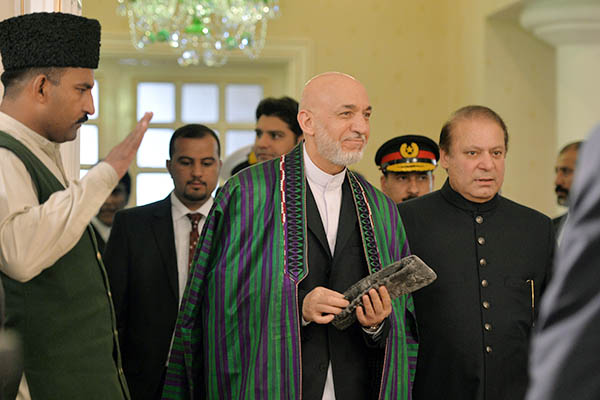 Afghan president ends two-day visit to Islamabad after urging Pakistan to help arrange peace talks between the government and the Taliban.

Karzai came to Islamabad to meet Sharif for the first time since his election in May in a bid to overcome a series of public rows that have hampered efforts to end 12 years of war in Afghanistan.

The Afghan president urged Pakistan to help arrange peace talks between his government and the Taliban, then took the unexpected step of extending his visit by a day. The two leaders met for lunch in the mountain town of Murree, just north of Islamabad, and discussed “matters of common interest,” according to a statement from the Pakistani foreign ministry.

“President Karzai reiterated his invitation to Prime Minister Nawaz Sharif to visit Afghanistan. The prime minister accepted the invitation,” the statement said, adding that the dates would be worked out later.

Infuriated by the opening in June of a Taliban office in Qatar, considered a precursor towards talks with U.S. officials, Karzai now wants Pakistan to help open dialogue with the insurgents.

Elements of the Pakistani state are widely accused of funding, controlling and sheltering the Taliban. Islamabad says publicly it will do anything to stop the fighting in Afghanistan. But analysts doubt Pakistan has the influence to force the Taliban to the negotiating table—and the insurgents have publicly refused all contact with Karzai’s government, branding it a U.S. puppet.

Karzai said Afghanistan expected Pakistan to provide “opportunities or a platform for talks between the Afghan High Peace Council”—Kabul’s official negotiators—and the Taliban.

Afghan government peace negotiators accompanying Karzai earlier called for the release of the most senior Taliban figure detained in Pakistan, former deputy leader Abdul Ghani Baradar. No mention was made about prisoner releases in the short statements made by Sharif and Karzai. Questions were not allowed.

Pakistan released 26 Taliban prisoners late last year. Afghan officials believe former detainees may talk to the Kabul government, although observers say there is little evidence those hopes have been realized.