Kashmir Struggles to Cope With Trauma 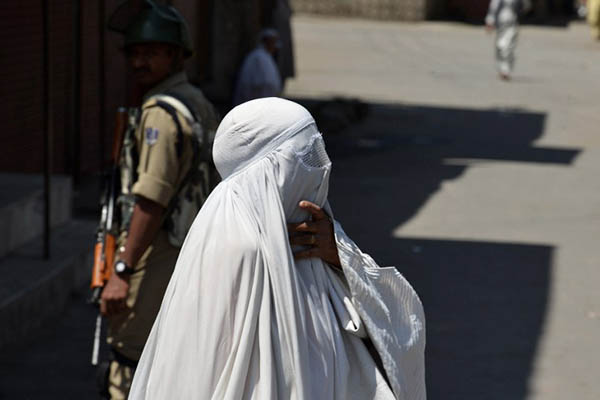 In a consultation room in a Kashmiri hospital, Parvaiz Ahmed struggles to find the words to describe how his interrogation at the hands of India’s security forces seven years ago has left him traumatized. Speaking in a whisper and barely looking up from the table, Ahmed’s face is wracked with pain as he speaks of his sleepless nights, still haunted by his months in detention in 2009.

“I worry all the time that they will come back and arrest me again,” the 38-year-old tells his trauma therapist. “We can see maybe 190 patients per day and I average around 100,” says Arshad Hussain as he explains the workload at the Shri Maharaja Hari Singh Hospital. “Sixty to 80 percent of them are trauma, depression or PTSD [post-traumatic stress disorder] patients,” he adds.

The hospital is situated in the center of Srinagar, the largest city in Kashmir—an often achingly beautiful Himalayan region divided between India and Pakistan and claimed in full by both. Since an uprising erupted in the India-administered part of the territory in the late 1980s, rights groups estimate some 70,000 people have been killed.

While the violence is on a smaller scale these days, tensions are never far from the surface. More than 100 people have been killed since July when a prominent militant leader was shot dead by Indian forces.

A Doctors Without Borders survey last year found more than 1.5 million living in the Kashmir Valley have symptoms of depression. Some are relatives of those killed, such as Mohammad Shafi Bhat, who lost his voice for several years after troops shot dead his 23-year-old son Bashir Ahmad Bhat in 2014, and still finds speaking a struggle.

Shafi, 50, is barely audible as he tries to recount the events surrounding Bashir’s shooting as he waters the flowers around his son’s grave in Srinagar’s ‘Martyrs’ Cemetery.’ He soon gives up and instead pulls a miniature photo portrait of his son from his wallet, his face streaming in tears.

Some of the other sufferers don’t even have a body to mourn over. For some, the last glimpse of their loved ones was as they were being hauled away for questioning. It’s a situation that further complicates the grieving process.

Rahma Begum’s son Mir Ali disappeared 13 years ago from their hamlet in the Kashmir Valley, home to around 7 million people. For three years afterwards, she got up at dawn to search for her son, scouring the nearby forest for any clues as to his whereabouts, unable to accept he was gone for good. “Everyone told me I had gone mad, that I was mad,” she said.

Amnesty International and other advocacy groups say around 8,000 people have permanently “disappeared” after being taken away for questioning by the security forces in India-administered Kashmir. Their bodies are widely believed to have been buried in unmarked graves or thrown into rivers by security forces, who can operate with virtual impunity under a special act.

Then there are the likes of Ahmed who spent years bottling up the resentments bred from often brutal interrogations by security agents whom rights groups have accused of using torture.

Mudasir Hassan, who conducts therapy sessions at Srinagar’s Psychiatric Diseases Hospital, said a lot of his patients suffered from erectile dysfunction. While Kashmir is a predominantly Muslim region, some victims have turned to alcohol as a coping mechanism, he said. “Alcohol is an issue, as is drug dependency,” he told AFP.

Big queues crowd around the tiny window of the dispensary at Hassan’s hospital from where the pharmacists dispense cocktails of pills throughout the working day. Medics say stress levels are exacerbated by India’s large military presence, with troops and armored vehicles posted on just about every street corner in Srinagar and at checkpoints throughout the Kashmir Valley.

People living in villages regarded as militant hotbeds by the security forces are often woken in the middle of the night by the sound of army patrols or raids on houses. “People are talking about this more… They understand now that there is something behind these symptoms,” said Hussain. “It is not a problem with them. It is because of something outside that has happened to them.”