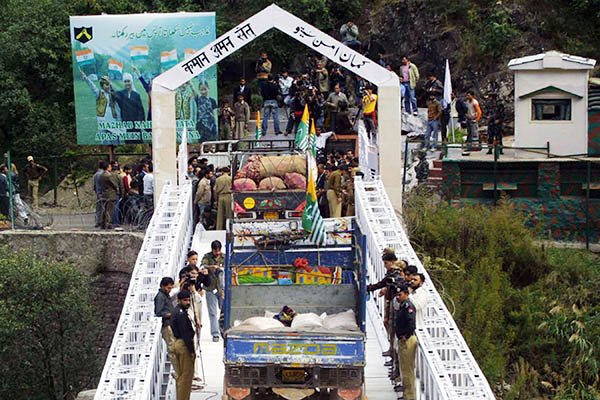 Businesses on both sides of the LoC hope New York meeting will help trade resume between neighboring countries.

Traders in Kashmir are hoping this weekend’s meeting between the Pakistani and Indian prime ministers will ease rising tensions that have seen trade across the territory’s de facto border grind to a halt.

Barter trade across the Line of Control (LoC), which divides the disputed Himalayan region between the nuclear-armed rivals, began in 2008 as part of peace efforts. Mounting tensions and deadly skirmishes along the heavily militarized LoC in recent months have seen the trade come to a standstill for more than three weeks.

Violence flared on Aug. 6 when five Indian soldiers were killed in an ambush Delhi blamed on Pakistan, and on Thursday militants stormed an Army base on the Indian side, killing 10.

Prime Minister Nawaz Sharif and his Indian counterpart Manmohan Singh are due to meet on the sidelines of the U.N. General Assembly in New York this weekend—the first top-level dialogue in three years.

Mohammad Ismail, the chief of the Trade and Travel Authority in Pakistan-administered Kashmir, urged the two leaders to try to cool tensions to end the trade impasse, which he said was costing traders millions of rupees.

“We’re not expecting any major breakthroughs in the talks, but we want them to move the peace process forward,” he said. “People-to-people contacts between the two countries should be held so trade may resume.”

Kashmir, divided between India and Pakistan at their independence from Britain in 1947, has been a continual thorn in relations and the countries have fought two wars over the territory.

Singh condemned Thursday’s “heinous” attack but said it would not deter him as he seeks to resolve problems with Pakistan through dialogue. On Friday however, he toned down expectations for the meeting, saying Pakistan remained an “epicenter of terrorism.”

Ejaz Ahmad Mir, vice president of the LoC trade union said: “We appeal to the international community and also the two premiers to ensure that the peace process does not derail. If it is move forward then the trade can be resumed, but we don’t have much hope.”

The barter arrangement sees goods including rice, jewels, sandals and fruit leaving Pakistan-administered Kashmir and carpets, shawls, dried fruits, and spices amongst others coming from the Indian side.

At Chakothi border crossing, Mohammad Sadiq Shaikh, one of 800 Pakistani traders, spoke of his anxiety at the halt in business.

He has sent potatoes and apples worth up to Rs. 4.2 million to Srinagar, but was worried if he would get the goods in exchange from Indian side. “I am very worried and tense over this hiatus and all my money is at stake,” Shaikh said.

Similarly, roadside restaurants at the crossing were also worried about their future as business from drivers and their crew has dropped off.

Mubeen Shah, president of the Jammu and Kashmir Joint Chamber of Commerce and Industry, said the row also involved a disagreement about which goods could be exchanged. “The traders on Indian side went on strike because there were not enough items from Pakistan-administered Kashmir to be traded in barter against the 21 items allowed without the restriction of origin from the Indian side,” he said. “It is not possible to trade just a few items originating from Pakistan-administered Kashmir with the 21 items originating from all across India. It creates an unbridgeable deficit.”

Shah said traders felt cheated by both governments, as in the original agreement there was no restriction on which goods could be traded on the basis of their origin. He said the number of traders who cross the LoC from the Indian side has shrunk from 300 to just 30 since it started in 2008.

The trade from Jammu region, the other crossing point on the LoC, is continuing, but a senior local official said it had fallen drastically. Shantmanu, the provincial administrative head of Jammu, said about 30 to 40 goods trucks cross into the Indian side each week, but only about 20 to 30 cross the other way.