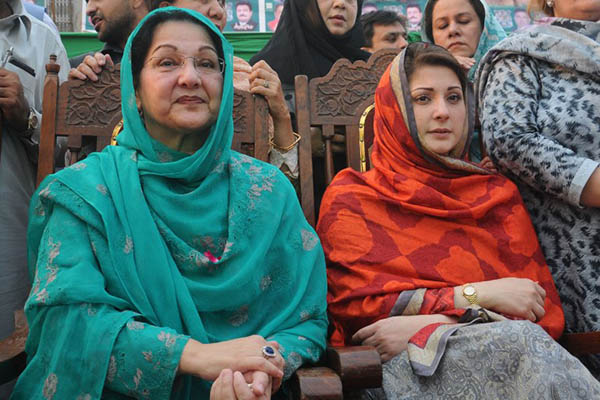 Kulsoom Nawaz, the wife of jailed ex-prime minister Nawaz Sharif, died in hospital on Tuesday. She was 68.

According to reports, Kulsoom was placed on life support earlier today at London’s Harley Street Clinic after her health began to rapidly deteriorate. Despite efforts from doctors, she stopped responding to treatment and was declared in critical condition. Confirming her worsening health, the Sharif family had appealed for prayers. She passed away a few hours later.

Kulsoom served as first lady of Pakistan for three non-consecutive terms of her husband’s premiership from 1990-1993, 1997-1999, and 2013-2017. Born in 1950 in Lahore, Kulsoom attended Islamia College and graduated from the Forman Christian College. She received a Master’s degree in Urdu from Punjab University in 1970. She married Nawaz Sharif a year later.

Kulsoom was widely respected as the matriarch of the Sharif clan and served as the president of the Pakistan Muslim League (Nawaz) from 1999 till 2002 after Gen. Pervez Musharraf staged a military coup and forced her husband to flee Pakistan in exile. During her husband’s incarceration, Kulsoom led defiant demonstrations against Musharraf and his regime to demand freedom for her husband.

In September 2017, she had been elected to the National Assembly for the first time in by-elections on the seat vacated by her husband after the Supreme Court disqualified him from holding public office in the Panama Papers case.

Kulsoom had been admitted to hospital on June 14 after suffering a cardiac arrest and was in a coma for several weeks before regaining consciousness. She had been diagnosed with lymphoma in August 2017.

Kulsoom is survived by her husband Nawaz Sharif, and their four children, Maryam, Asma, Hassan and Hussein.

In a statement, Prime Minister Imran Khan condoled with Kulsoom Nawaz’s family and expressed deep grief and sorrow over her death. He said Kulsoom had been a “brave lady” and directed the Pakistani High Commission in London to assist in the provision of all necessary facilities for the deceased’s heirs