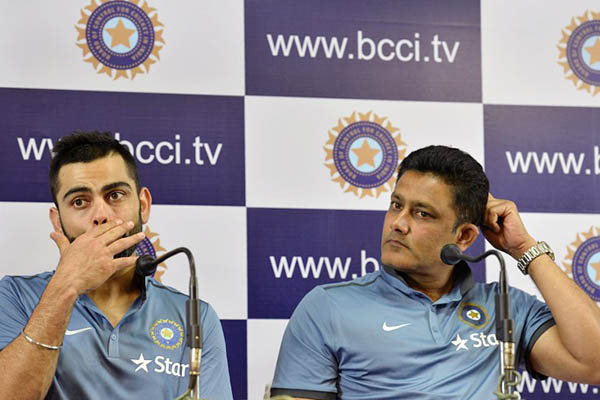 Title-holders India will look to put an off-field row behind them when they face arch-rivals Pakistan in their Champions Trophy opener at Edgbaston on Sunday.

The build-up to what is arguably cricket’s most anticipated fixture has been dominated by reports of a falling out between India captain Virat Kohli and coach Anil Kumble. Former India leg-spinner Kumble has overseen five Test series wins since his appointment in June last year. His contract expires after the end of the Champions Trophy but many have questioned the wisdom of the Board of Control for Cricket in India’s decision to advertise Kumble’s job a week before the one-day international tournament starts.

Ramachandra Guha, who quit a Supreme Court-appointed four-member committee overseeing the BCCI in protest, said in his letter of resignation: “If indeed the captain and the head coach were not getting along, why was this not attended to as soon as the Australia series was over in late March? Why was it left until the last minute, when a major international tournament was imminent?”

There were fears India may not even get the chance to defend the title they won at Edgbaston four years by beating hosts England in a thrilling final reduced by rain to 20 overs per side, after the BCCI hinted at a boycott of the 50-over tournament as a result of a revenue-sharing dispute with the International Cricket Council (ICC). But Kohli, one of the most driven players now in world cricket, said as his squad left for England: “The hunger to win and ruthlessness is what we speak about all the time.”

The India captain leads a powerful batting line-up, with former Pakistan skipper Shahid Afridi, in a column for www.icc-cricket.com, writing: “While Kohli is the backbone, India possesses considerable firepower around him. Rohit Sharma, Shikhar Dhawan, Ajinkya Rahane, Yuvraj Singh and MS Dhoni are all match-winners.”

Afridi also noted the “balance” in a bowling attack, which is set to include seamers by Bhuvneshwar Kumar and Mohammad Shami as well as the spin duo of Ravichandran Ashwin and Ravindra Jadeja.

But Pakistan are not without hope and boast proven performers in the likes of skipper Sarfraz Ahmed, an excellent wicket-keeper/batsman, was well as a big-hitting rookie in Faheem Ashraf. “We have nothing to lose, we just want to play our natural game,” Sarfraz said last week. “We are very hopeful of playing well in this tournament and we want to win it.”

Yet for all that players on both sides have tried to label Sunday’s clash as “just another game,” the fact is someone always has something to lose in an India-Pakistan match, a fixture that commands the attention of billions round the world let alone in the two cricket crazy sub-continent.

Political rivalry means the two sides have not played a bilateral series since 2012-2013, and India have refused to consider the idea without an end to “cross border terrorism”—code for militant incursions along the disputed Kashmir border.

India have never lost a 50-over World Cup or Twenty20 showdown against Pakistan, and a win on Sunday would put them in good stead in a tough group also including Sri Lanka and South Africa. But Pakistan have won two of their three Champions Trophy showdowns against India.